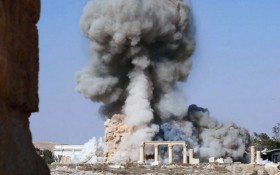 Black market sellers of weapons-grade nuclear material have been actively seeking out buyers from the Islamic State (ISIS).

And while international authorities were able to infiltrate and stop a potential sale, experts are warning that it could be a matter of time before a transaction is completed.

The Associated Press is reporting that four arrests have already been made in the former Soviet-controlled country of Moldova of suspected Russia-affiliated gangsters attempting to contact and sell nuclear weapons to the group. This means it could just be a matter of time before ISIS has at least enough material for a so-called “dirty bomb.”

Earlier this year, two men were caught plotting their deal at an unlikely spot: the terrace of Cocos Prive, a dance club and sushi bar in Chisinau, the capital of Moldova.

“You can make a dirty bomb, which would be perfect for the Islamic State,” the smuggler said. “If you have a connection with them, the business will go smoothly.”

The previously unpublicized case is one of at least four attempts in five years in which criminal networks with suspected Russian ties sought to sell radioactive material to extremists through Moldova, an investigation by The Associated Press has found. One investigation uncovered an attempt to sell bomb-grade uranium to a real buyer from the Middle East, the first known case of its kind.

In that operation, wiretaps and interviews with investigators show, a middleman for the gang repeatedly ranted with hatred for America as he focused on smuggling the essential material for an atomic bomb and blueprints for a dirty bomb to a Middle Eastern buyer.

In wiretaps, videotaped arrests, photographs of bomb-grade material, documents and interviews, AP found that smugglers are explicitly targeting buyers who are enemies of the West. The developments represent the fulfillment of a long-feared scenario in which organized crime gangs are trying to link up with groups such as the Islamic State and al-Qaida – both of which have made clear their ambition to use weapons of mass destruction.

But their successes were undercut by striking shortcomings: Kingpins got away, and those arrested evaded long prison sentences, sometimes quickly returning to nuclear smuggling, AP found.

Most of the operations arrests were made after samples of nuclear material had been obtained rather than the larger quantities. That means that if smugglers did have access to the bulk of material they offered, it remains in criminal hands.

The repeated attempts to peddle radioactive materials signal that a thriving nuclear black market has emerged in an impoverished corner of Eastern Europe on the fringes of the former Soviet Union. Moldova, which borders Romania, is a former Soviet republic.

Wiretapped conversations exposed plots that targeted the United States, the Moldovan officials said. In one case, a middleman said it was essential the smuggled bomb-grade uranium go to Arabs, said Malic, an investigator in all four sting operations.

“He said: ‘I really want an Islamic buyer because they will bomb the Americans.'”