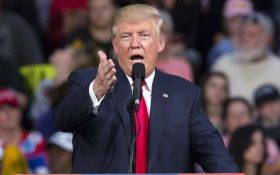 Just two days before Republican presidential candidate Donald Trump and rival Hillary Clinton were set to face-off in the second presidential debate, and the exact day that WikiLeaks released new Clinton emails, a lewd and shameful audio tape from 2005 rocked the Trump campaign.

In it, Trump makes a series of inappropriate comments about women that were never intended to be aired for public consumption.

Was the timing of the tape’s release a coincidence? Top evangelical conservative and Liberty University President Jerry Falwell Jr. isn’t buying it.

In fact, the conservative insider claims he has heard from multiple sources that the Republican establishment was behind the whole thing. And it may be just the beginning of their last ditch “dump Trump” efforts.

In an exclusive interview with WABC, Falwell claimed to have insider information that the establishment GOP leaders used the tape in a last-gasp push to force Trump out of the race — or to make sure he can’t possibly win.

Falwell told radio host Rita Cosby, “I think this… thing was planned, I think it was timed, I think it might have even been a conspiracy among establishment Republicans who have known about it for weeks and who tried to time it to do the maximum damage to Donald Trump.”

He did not want to publicly name names, but said, “I’ve got some independent information, but I’m not going to reveal it on the air – but I think some of the establishment folks who reluctantly endorsed him had this planned all along as a way to slither out of the endorsement.”

And, sure enough, shortly after the tape was released, mainstream Republicans began dropping their endorsements of Trump en masse.

“It wasn’t a coincidence that it came out right before Trump was supposed to appear with Paul Ryan at a rally, and it conveniently gave Paul Ryan a way to disinvite Trump,” Falwell said.

Former Arkansas Gov. Mike Huckabee told Fox News’ Megyn Kelly on Monday that the Republican politicians disavowing Trump following the release of the vulgar video were looking for any excuse to turn against him, giving further credence to Falwell’s claims.

While many establishment figures have backed down from supporting Trump, Republican Party Reince Priebus remained loyal following the video release, flying with Trump to the debate Sunday and attempting to ensure voters Monday that, “everything is on course.”

That’s unless the establishment GOP anti-Trumpers have another sneak attack planned.

Was the lewd 2005 Trump tape an insider GOP conspiracy? Comment below.