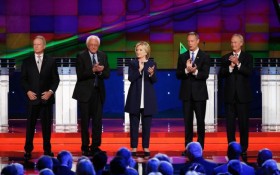 Multiple sources are reporting that former Virginia Sen. Jim Webb is set to announce he is dropping out of the Democratic race for president and is considering launching an independent bid instead.

Webb planned to hold a news conference on Tuesday. The person spoke on condition of anonymity and was not authorized to speak publicly ahead of Webb’s announcement.

Webb repeatedly complained during the first Democratic debate last week that he had little time to answer questions. He said Thursday he felt the debate had been “rigged in terms of who was going to get the time on the floor.”

Webb was expected to speak on his decision Tuesday at the National Press Club in Washington.