Boehner out as House speaker - The Horn News 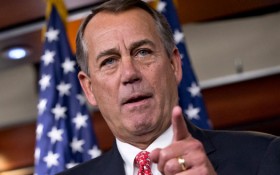 In a stunning move, House Speaker John Boehner informed Republicans on Friday that he would step down at the end of October, giving up his coveted leadership post and his seat in Congress in the face of hardline conservative opposition.

The 13-term Ohio Republican shocked his GOP caucus early Friday morning when he informed them of his decision in a closed-door session. It came one day after the high point of Boehner’s congressional career, a historic speech by Pope Francis to Congress at Boehner’s request.

Rep. John Mica, R-Fla., said Boehner “just does not want to become the issue. Some people have tried to make him the issue both in Congress and outside.”

Boehner has often squared off against the Tea Party bloc of the party, and is currently embroiled in a fight that could shut down the government next week.

Conservatives have demanded that any legislation to keep the government operating past Wednesday’s midnight deadline strip Planned Parenthood of its funds, a move rejected by Democrats and moderate Republicans.

The dispute had threatened Boehner’s speakership and roiled the GOP caucus.

It’s currently unclear who may be waiting in the wings to take Boehner’s place, although lawmakers like House Majority Leader Kevin McCarthy and Wisconsin Rep. Paul Ryan have reportedly had their eyes on the speaker’s chair. Getting a Tea Party representative elected may be a hard sell among Democrats and more moderate Republicans.