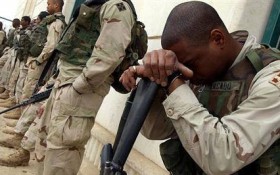 A Jordanian policeman opened fire this morning on foreign trainers at a police training compound, killing two American military personnel, as well as a South African trainer. The gunman was shot dead by responding forces, a government spokesman said.

Jordan, a U.S. ally that has a peace treaty with Israel, has long been seen as an island of relative stability in a turbulent region. A terror attack by a Jordanian police officer against American military could mark the beginning of a disturbing new trend in the country.

U.S. forces in Afghanistan have come under attack on a number of occasions by local police and troops serving alongside them, in what are known as “green-on-blue” assaults. Such attacks have been extremely rare in the Middle East.

A military official said the attacker was a police captain who worked as a trainer at the facility on the outskirts of the Jordanian capital, Amman. The captain was married and had two children, said the official, who spoke on condition of anonymity because the government has not released the assailant’s identity.

There has been concern that militants could carry out revenge attacks on Jordanian soil.

In Washington, State Department spokesman John Kirby said U.S. officials were “in contact with the appropriate Jordanian authorities, who have offered their full support.”