American hero stabbed in a bar - The Horn News 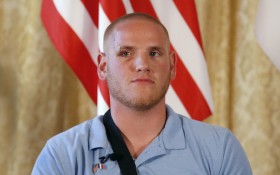 An Air Force spokesman says Airman 1st Class Spencer Stone, who helped subdue an attacker on a French train in August, is in stable condition after being stabbed in California.

Stone is assigned to Travis Air Force Base in California.

Karns says the matter is being handled by local law enforcement officials.

Multiple media outlets are reporting that Stone was stabbed four times in the chest late last night, at approximately 12:40am. The stabbing occurred on a popular nightlife spot in Sacramento, California at 21st and K Street, which is close to where Stone is stationed.

Police initially reported that Stone was not expected to survive, but he has since been stabilized. Stone is being treated in a hospital in the Sacramento area and is listed in stable condition.