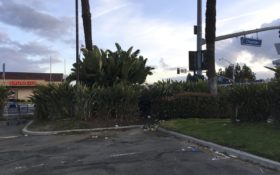 Southern California authorities are investigating the deaths of two adults and two children whose bodies were found in a parked van that had its windows covered with blankets and a sunshade.

Police in the city of Garden Grove near Los Angeles say a woman reported Thursday night that the white Honda van was emitting a very foul odor.

Police found the bodies of a man, a woman, a girl and a boy. None had obvious trauma.

The woman who made the report told police she had seen the van parked in the CVS store lot for several days and thought its occupants were a homeless family.

Orange County coroner investigators will try to determine the cause and time of the deaths.