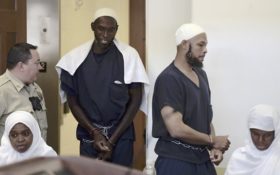 More than a week ago, police raided the property of a squalid makeshift living compound near the Colorado state line reportedly being used to train young children to commit radical Islamic terror. The children living in filth, severe hunger and dangerous conditions that included a leaky propone tank. Five adults were arrested and 11 children were placed in state custody.

Taos County Sheriff Jerry Hogrefe testified Monday that the remains of a young boy were found inside tunnels that had been dug from inside the compound to an opening 100 feet away.

A 15-year-old living at the compound explained to an FBI agent that the children were told that young boy would be resurrected and “would instruct others on the property about what corrupt institutions to get rid of,” in reference to financial and government institutions to target for mass shootings that might include schools.

Despite this, a state judge on Monday cleared the way for five defendants who were arrested on child abuse charges at a remote New Mexico compound to be released pending trial. Authorities pleased to keep them in jail, suspicions that the group was training children to commit radical Islamic terror.

Judge Sarah Backus set a $20,000 bond for each defendant and ordered that the two men and three women wear ankle monitors, have weekly contact with their attorneys, not consume alcohol and have no firearms.

Prosecutors presented evidence that Siraj Ibn Wahhaj provided some of the children with firearms training — including tactical skills such as “speed loading” guns and firing while in motion. Aside from some rifles, handguns and ammunition, authorities say they found books on being effective in combat and building untraceable rifles.

Defense attorneys argued that prosecutors were unfairly painting their clients as armed militants as the rifles and handguns found on the property are common guns that can be bought at retail stores and their clients made no aggressive efforts to defend their compound as authorities closed in to serve search warrants earlier this month.

“There was no gun battle, there was no resistance,” said Tom Clark, the attorney representing Siraj Ibn Wahhaj.

Clark said his client had permits to carry his weapons and no criminal record — accusing prosecutors of holding adults at the compound to an unusual standard because of their race and Muslim faith.

“They are black and they are Muslim,” Clark said. “If these were white people of Christian faith who owned guns, it’s not a big deal. … But they look different and they worship different than the rest of us.”

Prosecutors denied any discriminatory treatment based on religious background or race, and warned that the defendants came to New Mexico with their children on a violent and dangerous mission.

“This was not a camping trip and this was not a simple homestead of the kind that many people do in New Mexico,” said Deputy District Attorney Timothy Hasson.

Judge Backus said prosecutors failed to articulate any specific threats or plan against the community, despite providing concerning information.

“What I’ve heard here today is troubling, definitely. Troubling facts about numerous children in far from ideal circumstances and individuals who are living in a very unconventional way,” Backus said.

Family members say the remains of a boy found at the compound last week are those of Wahhaj’s disabled son, though state medical examiners have not yet identified the body conclusively.

Testimony from an FBI agent shed some new light on the fate of the 3-year-old disabled child Abdul-ghani.

Agent Travis Taylor described interviews with two children from the compound, ages 13 and 15, after they were taken into protective custody by the state.

The 15-year-old explained to Taylor that the little boy died at the compound in a ritual to “cast out demonic spirits,” and his family believed he would “return as Jesus.”

These children ranging from one to 15 years old were all placed in protective custody following the Aug. 3 raid.