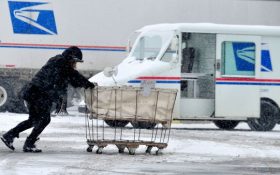 Several live lizards were wrongly delivered to a residence in a village north of New York City.

“Needless to say the addressee was quite startled when they opened the box,” Port Chester police wrote on Facebook.

Police received the call about the reptiles just after noon on Saturday. They posted a picture on Sunday of three dark-colored lizards held in a large white container. It was not immediately clear whether there were more reptiles not pictured.

“If you lost your lizards and iguanas we have them at the police department,” police wrote.

They said they held the animals until a local animal sanctuary could pick them up for safekeeping.