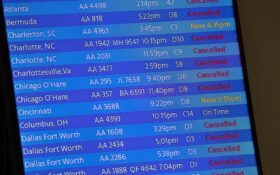 Amid months of mass flight cancelations and delays, the Department of Transportation has launched a customer service dashboard to help vacationers ahead of the travel-heavy Labor Day weekend.

Starting Thursday, travelers will be able to check the dashboard and see what kinds of guarantees, refunds or compensation the major domestic airlines offer in case of flight delays or cancelations. It’s designed to allow travelers to shop around and favor those airlines that offer the best compensation.

The dashboard is part of an extended pressure campaign from Transportation Secretary Pete Buttigieg, who has publicly challenged the major carriers to improve service and transparency after a summer marred by cancelations and flight delays. As summer travel returned to nearly pre-coronavirus pandemic levels, airlines struggled to keep pace, with mass cancelations being blamed on staffing shortages, particularly among pilots.

“Passengers deserve transparency and clarity on what to expect from an airline when there is a cancelation or disruption,” Buttigieg said in a statement Wednesday. The new tool, he said, will help travelers to “easily understand their rights, compare airline practices, and make informed decisions.”

The dashboard compares all the major domestic airlines’ policies on issues such as which offer meals for delays of more than three hours and which offer to rebook flights on the same or different airlines at no additional charge. It focuses on what it calls “controllable” cancelations or delays — meaning those caused by mechanical issues, staffing shortages or delays in cleaning, fueling or baggage handling. Delays or cancelations caused by weather or security concerns do not count.

The Department of Transportation is hoping that the dashboard will encourage competition among airlines to offer the most transparency and the best protections for customers.

So far this year, airlines have canceled about 146,000 flights, or 2.6% of all flights, and nearly 1.3 million flights have been delayed, according to tracking service FlightAware. The rate of cancelations is up about one-third from the same period in 2019, before the pandemic, and the rate of delays is up nearly one-fourth.

Federal officials have blamed many of the disruptions on understaffing at airlines, which encouraged employees to quit after the pandemic started. The airlines have countered by blaming staffing problems at the Federal Aviation Administration, which employs air traffic controllers.