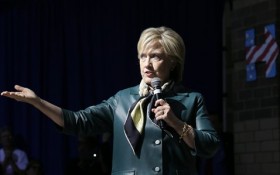 Attorney General William Barr just dropped a bombshell on the Russian investigation — and the news has top Democrats panicked.

Barr has appointed a U.S. attorney to examine the origins of the Russia investigation and determine if intelligence collection by former President Barack Obama’s administration into the Trump campaign was “lawful and appropriate.”

And Barr didn’t just appoint anyone to look into the so-called “spygate” scandal.

He tasked John Durham, a U.S. attorney in Connecticut with a serious reputation for rooting out corruption inside the FBI, with the inquiry. Fox News called him a “hard-charging, bulldog prosecutor.”

Durham’s appointment comes about a month after Barr told members of Congress he believed “spying did occur” on the Trump campaign in 2016. Barr later said he was gathering a team to look into the origins of the special counsel’s investigation.

For years, critics have complained that the Russian meddling in 2016 was unfairly linked to the Trump campaign because of the debunked dossier funded by then-Democratic presidential candidate Hillary Clinton’s campaign.

Barr provided no details about what “spying” may have taken place but appeared to be alluding to a surveillance warrant the FBI obtained on a former Trump associate, Carter Page, and the Obama administrations use of a paid informant to infiltrate the Trump campaign during the election.

Trump and his supporters have seized on both to accuse the Justice Department and the FBI of unlawfully spying on his campaign.

The inquiry, which will focus on whether the government’s methods to collect intelligence relating to the Trump campaign were lawful and appropriate, is separate from an investigation by the Justice Department’s inspector general. The agency’s watchdog is also examining the Russia probe’s origins and Barr has said he expects the watchdog report to be done in May or June.

The news of Durham’s appointment had conservative lawmakers gleeful —

John Durham is an outstanding choice for special prosecutor investigating 2016 pre-election activities—his selection further demonstrates Bill Barr’s tenacity and determined desire to get to the truth and restore credibility at the top tier of the DOJ and FBI.

Congressional Republicans have also indicated they intend to examine how the investigation that shadowed Trump’s presidency for nearly two years began and whether there are any legal concerns.

The recently concluded investigation from special counsel Robert Mueller found zero evidence of a criminal conspiracy between the campaign and the Kremlin. There was no collusion by the Trump campaign to tip the outcome of the 2016 presidential election.

Durham is a career prosecutor who was nominated for his post as U.S. attorney in Connecticut by Trump. He has previously investigated law enforcement corruption, the destruction of CIA videotapes and the Boston FBI office’s relationship with mobsters.

Supporters of the nomination say this is bad news for so-called “Deep State” agents, notably former CIA Director John Brennan, who served from 2013 to 2017 under former President Barack Obama.

In nominating him, the White House said Durham and other nominees for U.S. attorney jobs share Trump’s vision for “making America safe again.”

Durham was unanimously confirmed by the Senate in 2018. At the time, Connecticut’s two Democratic senators, Richard Blumenthal and Chris Murphy, called Durham a “fierce, fair prosecutor” who knows how to try tough cases.

In addition to conducting the inquiry, Durham will continue to serve as the chief federal prosecutor in Connecticut.

FLASHBACK: Whistleblower drops Mueller BOMBSHELL (“it was ALL a set-up”)