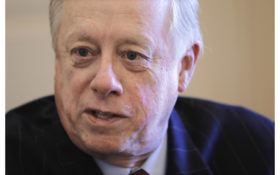 The Democrats’ shrinking hopes of capturing the Senate and taking control of Congress hinges on one critical race — and they may have just blown it in a big way!

In Tennessee, once-popular former Democratic Gov. Phil Bredesen is rapidly falling behind incumbent Republican Sen. Marsha Blackburn as voters wake up to the fact that he’s not the moderate he claims to be.

And the final nail in his campaign coffin just might be a new undercover video that exposes his hardcore leftist agenda.

Bredesen made a big show earlier this month of claiming he’d buck his fellow Democrats and vote to confirm Brett Kavanaugh to the Supreme Court.

“I believe a Senator’s responsibility to ‘advise and consent’ is not a license to indulge in partisanship, but should focus on the qualifications of the nominee, their ethics and their temperament,” he said, according to The Tennessean newspaper.

In reality, that was a ploy to win over the state’s right-leaning voters – and an undercover activist for James O’Keefe’s Project Veritas caught Bredesen’s aides on camera admitting as much!

“I was so confused because I just can’t believe he would actually vote [for Kavanaugh]” the Project Veritas activist says on the video, posing as someone sympathetic to their cause.

And that’s when the truth came out.

“He wouldn’t,” said someone identified as campaign staffer Will Stewart. “But he’s saying he would… Which I don’t know if it makes it worse or better. No, it makes it better…”

A second aide also let her guard down.

“[Bredesen] thought that like by coming out in support [of Justice Kavanaugh] that it would get more Republicans on his side,” a staffer identified as Maria Amalla says in the sting video. “He wasn’t doing as well in the rural parts.”

Campaign aides admit that the idea of Bredesen working with national Democrats doesn’t appeal to Tennessee… so they’re acting like he’s a tough-minded independent.

In reality, he’s anything but.

“Between you and me once Phil actually gets into the Senate, he’ll be a good Democrat,” the person identified as Stewart says in the sting video.

Stewart even agreed with the undercover activist that Tennessee voters are “ignorant,” a slap in the face of the very people Bredesen is hoping to represent.

“Phil Bredesen and his campaign have been shown to lie to Tennesseans, saying one thing to persuade voters on the campaign trail but clearly planning to do something entirely different should he get into office,” O’Keefe said in a news release.

Around the country, Democratic candidates in conservative-leaning districts are keeping quiet about their true agenda.

But once in office, make no mistake about it. They’ll move swiftly to try to pass restrictive gun control laws, raise taxes, increase spending, and hinder President Donald Trump at every turn.

In the more leftist districts, Democratic candidates are openly vowing to impeach the president.

But their radical agenda can be stopped in November, especially if the Republicans manage to at least hold onto the Senate. That’s looking more likely than ever… and you can thank the Volunteer State for that.

Just one month ago, a CNN poll found Bredesen with a 5-point lead over Blackburn.

Since then, a series of stunning GOP victories – including the confirmation of Supreme Court Associate Justice Brett Kavanaugh – has led to a rally in the polls for Republican candidates across the country and a rising approval rating for Trump.

Combined with the fact that Tennesseans are unlikely to vote Democrat anyway, and the race isn’t looking so close anymore.

The most recent poll from the New York Times shows Blackburn with a 14-point lead… a number that’s sure to grow as voters in Tennessee learn the real views of their former governor.