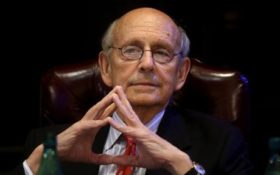 U.S. Supreme Court Justice Stephen Breyer has been grabbing headlines for the last year — and especially for the last few weeks. He publicly dissented from the majority ruling on the Texas abortion law, and now he’s started a tour to promote his upcoming book, The Authority of the Court and the Peril of Politics.

But when NPR sat him down for an interview, they opened with a question about a more personal topic: retirement.

“So, at least as I look at things now, I would guess that sometime relatively early in the upcoming term you will announce plans to retire,” NPR’s legal affairs correspondent Nina Totenberg remarked at the very beginning of the interview. “Am I wrong?”

“I’m only going to say that I’m not going to go beyond what I previously said on the subject, and that is that I do not believe I should stay on the Supreme Court, or want to stay on the Supreme Court, until I die,” Breyer responded. “When exactly I should retire, or will retire, has many complex parts to it. I think I’m aware of most of them, and I am, and will consider them.”

“What are the factors that adjust–” asked Totenberg, before she was interrupted by Breyer.

“I’m not going beyond what I said,” Breyer said. “For the simple reason that I would like this interview to be about my book.”

After the death of Justice Ruth Bader Ginsburg last year, the 83-year-old Breyer became the oldest justice on the court. He has served on the court since 1994.

First appointed by Bill Clinton, Breyer sides with the court’s liberal bloc, along with Justice Elena Kagan and Justice Sonya Sotomayor. He may lack the name recognition of Ruth Bader Ginsburg, but he has served as a roughly equal bane to the conservatives on the court. In the past, he has spent much of his time arguing against the methods of the conservative Justice Antonin Scalia.

True to form, he longs for a return to in-person arguments, he said.

Breyer, in addition to serving on the Supreme Court, has written several popular books, including his most recent. Most famously, he wrote Active Liberty, an attempt to refute the argument of Scalia’s book A Matter of Interpretation. In the new book, Breyer lays out his strategy for increasing public trust in the court. He has earned a reputation for his wordy, abstract style of writing — and speaking.

Still, for all his conservative-bashing Breyer has angered some Democrats because of his skepticism toward progressive fads like court-packing.

“What goes around comes around,” he warned Totenberg. “And if the Democrats can do it, the Republicans can do it.”

NEVER Use CBD Without THIS (your knees will thank you) [Sponsored]

Breyer has also angered the left over his refusal to retire.

Supreme Court justices serve on the court for life, but they can choose to retire at any time.

Usually, a justice retires when his or her preferred party controls both the presidency and the Senate.

Some Democrats look at Breyer and fear a repeat of the Ginsburg saga. In 2013 and 2014, the liberal Justice Ginsburg publicly spoke about her refusal to retire. She asked, “Who would you rather see on the court than me?”

She died in 2020 under a Republican Senate and a Republican president, and her seat was given to the conservative Justice Amy Coney Barrett — giving conservatives a narrow majority in the court.

Breyer, far from planning his exit, has hired four more clerks for the court’s next term. That term lasts until October 2022. The Democrats are expected to lose the Senate during the midterm elections the very next month.