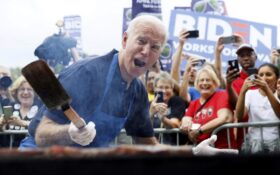 Now, they’re losing patience with him and the rest of the Democrats in Congress.

“We’ve been down this path before,” Cliff Albright, co-founder of Black Voters Matter, told The Hill. “You tell us that this is the most important election ever. You tell us you got our backs and you’re going to move on our issues. We come out in record numbers, historic numbers — and in Georgia not just once for November but then coming out and doing it again in January — and then you don’t deliver.”

Indeed, exit polls found that Black voters turned out big for Biden in the closest states, including Georgia, Michigan and Pennsylvania.

Black voters are also widely credited with giving the double victory in the January elections that led to two Democratic Senators from Georgia – and gave the left control over Congress.

Many of those voters were energized by Biden’s vow to deliver on voting rights legislation, police reform and a higher minimum wage.

But nine months into the Biden presidency, those have turned out to be empty promises as the bills have stalled in the Senate, which is controlled by Democrats but where Republicans hold filibuster power.

W. Mondale Robinson, founder of the Black Male Voter Project, told the Washington Post this month he organized for Biden last year, only to watch the issues most important to his community sink in the D.C. swamp.

“I think the frustration is at an all-time high, and Biden can’t go to Georgia or any other Black state in the South and say, ‘This is what we delivered in 2021,’ ” Robinson said. “Black men are pissed off about the nothingness that has happened. . . . Does it make the work harder? It makes the work damn near impossible.”

As a result, Biden’s plunging approval ratings are even steeper among minority communities… and the biggest hit has come among Black voters, where his approval dropped by nearly 20 points over just two months, from 85 percent in July to 67 percent in September, according to the Pew Research Center.

His overall approval rating over the same period fell from 52 percent in July to 49 percent in September, according to FiveThirtyEight, and has fallen even further since.

Biden earned the nod from many African-American voters for his eight years as loyal sidekick to President Barack Obama, the nation’s first Black president. Indeed, before they even turned out to vote for him in November, Black voters saved his flagging candidacy early in the primaries.

Biden finished a distant fourth in Iowa, then in fifth in New Hampshire.

The media had practically anointed Sen. Bernie Sanders (I–Vt.) to be the Democratic nominee.

But then Black voters – never comfortable with Sanders – turned out in force for Biden in the Feb. 29 primary in South Carolina, especially after he was endorsed by Rep. Jim Clyburn (D–S.C.).

Black voters made up 56 percent of the primary electorate in the state, and chose Biden by a wide margin, giving him not only a big victory but renewed momentum.

“To all of you here in South Carolina—and especially to Jim Clyburn, my friend—you lifted me and this campaign on your shoulders,” Biden said at the time. “I will never forget what you have done for us.”

That win carried him to a Super Tuesday rout and a clear path to the nomination.

But now, some voters say they feel forgotten – and they’re demanding action.

While most are unlikely to shift their allegiance to the GOP, there’s another danger in store for Democrats: They may not vote at all.

“I absolutely promise you that there’s going to be a drop in Black turnout — and not just the regular drop that you see going from a presidential year to the midterms,” Albright told The Hill. “You will see an even more precipitous drop because Black folks are dissatisfied with the ways that we have been taken for granted.”

That could spell disaster for Democrats in next year’s midterms.