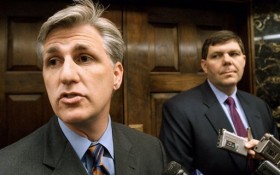 This story was updated at 12:35pm EST after the stunning announcement that Rep. Kevin McCarthy had dropped out of the House Speaker race.

John Boehner’s plan to install an even more moderate successor as House Speaker has fallen short.

Rep. Kevin McCarthy of California has just announced he will not seek the job.

McCarthy had been energetically nurtured by mainstream GOP legislators in the House since he was elected to Congress nine years ago. And with House Republicans holding a secret ballot today to see who their members are favoring to succeed Boehner, McCarthy was the odds-on favorite.

But it was not to be.

With no warning, McCarthy withdrew Thursday from the contest for speaker of the U.S. House, shocking fellow Republicans just before voting was to begin and plunging Congress’ GOP leadership into chaos.

Lawmakers said they were thunderstruck and in disbelief following McCarthy’s announcement, which came moments after they had showed up for an election nearly certain to end with McCarthy as their pick for speaker.

“I have never seen anything like this,” said Rep. Ryan Costello of Pennsylvania. Said Rep. Mick Mulvaney of South Carolina: “We don’t know why he did it.”

The election was postponed, as may be the scheduled Oct. 29 vote for speaker by the full House, Democrats as well as Republicans.

What happens next is unknown. McCarthy was by far the heavy favorite to replace Speaker John Boehner, who announced under pressure from conservatives that he would resign at the end of the month. Congress is facing major budget deadlines and fiscal decisions.

The other two Republican candidates for speaker — Reps. Jason Chaffetz of Utah and Daniel Webster of Florida — lack widespread support in the House GOP, although Webster has the backing of the hardline House Freedom Caucus.

But Thursday’s secret ballot — even if it had proceeded as expected — still would have been merely an early skirmish in the chaotic battle to lead the House. It was to have been followed by the vote in the full House where the Freedom Caucus could have blocked McCarthy’s ascent.

It wasn’t clear when the elections would be rescheduled, or if McCarthy, a 50-year-old Californian, would stay on as majority leader.

Restive conservatives are seeking a more aggressive stance against President Barack Obama. McCarthy’s retreat could be due to a big flub in one of his first interviews after becoming a candidate for speaker only served to make conservatives more nervous about him.

In an appearance on Fox News, McCarthy credited the House Benghazi committee with causing Hillary Rodham Clinton’s poll numbers to drop, undercutting GOP claims that the inquiry is apolitical.

Within days, McCarthy’s comments had been turned into Clinton campaign ads, the majority leader was furiously backpedaling and the speaker’s race had attracted new challengers.