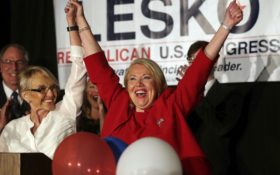 Conservatives just won their first big victory in the critical 2018 midterm election — and the mainstream media has been totally silent.

Republican Debbie Lesko won the special election in Arizona’s 8th Congressional District on Tuesday, keeping the U.S. House seat in GOP control despite a huge push by Democrats in the area.

The former state senator defeated Hiral Tipirneni, a former emergency room physician who had hoped to replicate surprising Democratic wins in Pennsylvania and Alabama. Liberals have been calling for a “blue wave” in opposition to President Donald Trump’s policies. Political experts have called races like Lesko’s in 2018 some the most important elections in American history.

Lesko replaces former Rep. Trent Franks, a Republican who resigned in December. At a victory party in her Glendale neighborhood, Lesko greeted supporters and looked back in wonder.

“I’ve really come a long way and this is really quite overwhelming, it’s very surreal,” she said. “Twenty-five years ago I left an abusive husband and I sure as heck never would have dreamt in a million years that I would be running for Congress to be a congresswoman. I mean, that’s right, now I’m actually running for Congress, I won!”

The district sprawls across western Phoenix suburbs, covering some of the most conservative areas of the red state, including the retirement community of Sun City.

Tipirneni worked the district hard and made a push for older voters by saying Lesko would vote to go after entitlement programs.

Lesko slammed Tipirneni as being out of touch with voters who oppose government-run health care. She called the Democrat too liberal for the area, and pointed to Tipirneni’s opposition to a wall on the Mexican border.

David Hunt, a 64-year-old retired construction and warehouse worker from Glendale, said he cast his vote Tuesday for Lesko because he believed that immigrants in the country illegally are creating unfair competition for jobs for recent high school students in Arizona.

“She’s the best candidate to deal with the porous border,” Hunt said.

His views were echoed by Larry Bettis, a retiree from Glendale.

“Immigration – the fence,” Bettis said. “That’s all I really care about.”