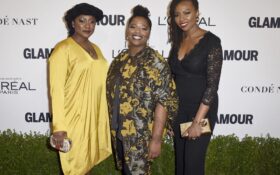 A co-founder of Black Lives Matter announced Thursday that she is resigning as executive director of the movement’s foundation after criticism from conservatives.

She decried what she called a smear campaign from a far-right group over her multimillion dollar real estate empire, but claimed neither that nor recent criticism from other Black organizers influenced her departure.

Patrisse Cullors, who has been at the helm of the Black Lives Matter Global Network Foundation for nearly six years, claimed she is leaving to focus on other projects, including the upcoming release of her second book and a multi-year TV development deal with Warner Bros. Her last day with the foundation is Friday.

“I’ve created the infrastructure and the support, and the necessary bones and foundation, so that I can leave,” Cullors told The Associated Press. “It feels like the time is right.”

The resignation comes on the heels of controversy over the foundation’s finances and over Cullors’ personal fortune.

“Those were right-wing attacks that tried to discredit my character, and I don’t operate off of what the right thinks about me,” Cullors said.

The BLM foundation revealed in February that it took in over $90 million last year, following the May 2020 murder of George Floyd and the violent riots and protests around the globe that followed. The foundation said it ended 2020 with a balance of more than $60 million in cash.

Critics of the foundation contend more of that money should have gone to the families of Black victims of police brutality who have been unable to access the resources needed to deal with their trauma and loss.

“That is the most tragic aspect,” said the Rev. T. Sheri Dickerson, president of an Oklahoma City BLM chapter and a representative of the #BLM10, a national group of organizers that has publicly criticized the foundation over funding and transparency.

“I know some of (the families) are feeling exploited, their pain exploited, and that’s not something that I ever want to be affiliated with,” Dickerson said.

Last month, Cullors was targeted by several conservative-leaning publications that alleged she took a large annual salary from the foundation, affording her recent purchase of a southern California home.

“I think I will probably be less visible, because I won’t be at the helm of one of the largest, most controversial organizations right now in the history of our movement,” Cullors said of her resignation. “I’m aware that I’m a leader, and I don’t shy away from that. But no movement is one leader.”