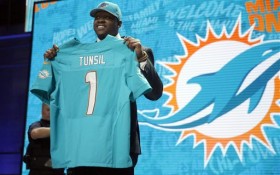 Mississippi offensive lineman Laremy Tunsil tumbled down the NFL draft board Thursday night after a bizarre video of him was posted on his Twitter account minutes before the start of the proceedings.

The video potentially cost him millions of dollars, and it’s being widely speculated that it was the end result of a blackmail scheme.

The approximately 30-second video, which showed Tunsil smoking from a mask equipped with a bong, was posted to his verified Twitter account before quickly being deleted. Tunsil and his team claim the account was hacked.

The entire account was deactivated about 30 minutes later but the video was another indicator of Tunsil’s off-the-field problems.

His troubled past — one chapter at a time — seemed to unfold on social media and national television for the world to see.

The excruciating wait for Tunsil, considered a potential No. 1 pick in the draft, finally ended when the Miami Dolphins took him with the 13th overall pick.

Tunsil initially wouldn’t say he was the person in the video, but eventually confirmed it was him. He said his Twitter account was hacked and that he “made that mistake several years ago.”

But Tunsil also had other social media problems Thursday.

He said his Instagram account was also hacked after a message was posted that showed an alleged text exchange between Tunsil and an Ole Miss football staff member where Tunsil requested money.

Tunsil acknowledged taking money from coaches during an interview after he was selected Thursday. When asked if he took money, Tunsil responded, “I’d have to say yeah.”

The 6-foot-5, 310-pounder sat out the first seven games of his junior season after the NCAA ruled he received improper benefits, including the use of three loaner cars over a six-month period.

Despite Tunsil’s troubled past, Mississippi coach Hugh Freeze — who was at the draft in Chicago with Tunsil — said his former star is a humble and hard-working young man.

“First of all, I believe in him,” Freeze told ESPN when asked about the video. “… That doesn’t mean mistakes have not happened. … I assure you that’s not who he is.”

Tunsil’s comments, however, could lead to some tough questions for Freeze from the NCAA. But Thursday night, it was Tunsil at the center of the storm.

Tunsil, a three-year starter at Mississippi, was considered a potential top overall pick before the Tennessee Titans traded the pick to the Los Angeles Rams.

The Titans had a chance to take Tunsil with the eighth overall pick after a trade with the Cleveland Browns, but Tennessee passed on him, selecting Michigan State left tackle Jack Conklin instead.

The Baltimore Ravens had the No. 6 pick, but also passed on Tunsil; they went with Notre Dame offensive tackle Ronnie Stanley. But Baltimore general manager Ozzie Newsome said his decision was not influenced by the video, he just had Stanley rated higher on his draft board.

“He was a very highly graded player and obviously what happened was unusual and disappointing,” Payton said. “It was a tough deal for everyone just watching and seeing it.”

His stepfather reportedly filed a lawsuit against him Tuesday related to a confrontation in June, when the men were both charged with domestic violence against each other. Those charges were eventually dismissed.

Tunsil was one of two Ole Miss players in this year’s draft with off-the-field issues that at least partly overshadowed productive college football careers.

Defensive tackle Robert Nkemdiche was charged with possession of marijuana following a 15-foot fall at a hotel in Atlanta in December. He was taken by the Arizona Cardinals with the 29th overall pick late in the first round.

“It’s heartbreaking because I love that dude and he’s such a good person,” Nkemdiche said. “I can’t wait to see what he does in the NFL.”