[Report] Obama being blackmailed over 9/11 - The Horn News 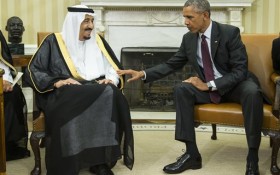 The Saudis are prepared to sell off $750 billion in United States assets if a bill that would allow the Saudi government to be sued over 9/11 passes Congress, according to The New York Times.

The move would be designed to destabilize the American economy and damage the value of United States currency. And critics say the Obama administration is already scrambling to comply with Saudi demands.

Al-Jubeir was referencing the Justice Against Sponsors of Terrorism Act (JASTA) bill, which — if passed by Congress — would let the U.S. victims of 9/11 and other terror attacks sue foreign sponsors of terrorism.

And that’s something the Obama administration is desperate to stop.

According to the report, the Obama administration has recently “been lobbying so intently against the bill that some lawmakers and families of Sept. 11 victims are infuriated. In their view, the Obama administration has consistently sided with the kingdom [of Saudi Arabia] and has thwarted their efforts to learn what they believe to be the truth about the role some Saudi officials played in the terrorist plot.”

It was been widely noted that fifteen of the 19 hijackers in the September 2001 attacks, which destroyed the World Trade Center and killed thousands, were citizens of Saudi Arabia. Families of the victims of this attack want to use the court system to hold rulers of the kingdom of Saudi Arabia, as well as foreign banks and charities, liable for their alleged financial backing of Islamic terror groups.

Because of a law passed in 1976, foreign nations currently have some immunity in American courts.

“The Senate bill is intended to make clear that the immunity given to foreign nations under the law should not apply in cases where nations are found culpable for terrorist attacks that kill Americans on United States soil. If the bill were to pass both houses of Congress and be signed by the president, it could clear a path for the role of the Saudi government to be examined in the Sept. 11 lawsuits,” The New York Times reported.

Suspicions on the Saudi royal families role in the terror attacks in New York “have lingered, partly because of the conclusions of a 2002 congressional inquiry into the attacks that cited some evidence that Saudi officials living in the United States at the time had a hand in the plot,” The New York Times reported.

“Those conclusions, contained in 28 pages of the report, still have not been released publicly.”