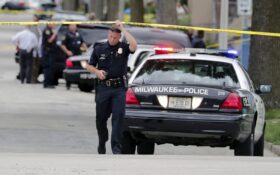 Thursday afternoon, he was murdered in cold blood — and Wisconsin Republicans want answers.

So far, authorities have failed to identify a suspect.

But state officials say there’s reason to believe the killing may be politically motivated. After all, it’s clear where Trammell stood on politics. The New York Post reports that Trammell’s small business was draped with signs in support of the President.

But it becomes more complicated.

Milwaukee Journal-Sentinal also reports that he was a supporter of the Black Lives Matter movement.

A writer who was familiar with Trammell, Adebisi Agoro, told The Post, “He had a lot of different views. But it was his last view that made people be outrageous with him.”

According to reports, the local community enthusiast was known for riding his bike around Milwaukee spreading his religious philosophy and political opinions.

Evidence from media sources suggests that Agoro could be right.

Milwaukee social worker Reggie Moore says he deescalated an altercation between Trammell and a young man about three weeks ago — a situation Moore says he thought was related to a Trump 2020 sign.

And the Monday prior to his killing, The Post writes that a man had followed Trammell around the city.

“He’s a black elder who didn’t deserve to die the way that he did,” Moore said.

Wisconsin GOP Chairman Andrew Hitt is hopeful that the injustice can inspire a rally cry among the community residents.

“This is going to be a motivating factor for us as we organize in central Milwaukee and across Wisconsin,” Hitt said. “I think it will give folks in the black community who support the president’s message more resolve and more determination than ever.”

“No American should fear for their personal safety because of where they live or their political affiliation.”