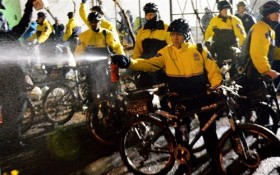 Some police supporters are calling for the cops to take harsher action against the protesters, who shut down a highway just days ago.

The protests have mainly been related to the death of Jamar Clark, 24, who was shot in the head during a confrontation with two police officers.

Police said he was a suspect in an assault and was interfering with paramedics trying to treat the victim. Police said there was a scuffle, and Clark was shot.

Protests have continued since then, with tensions escalating again Wednesday night as a crowd outside the precinct office near where Clark was shot grew. At one point, a chemical spray was directed at officers, police spokesman John Elder said.

Police later reported that several officers sustained minor injuries from rocks and bottles that were thrown and said several squad cars were damaged.

The president of the Minneapolis police union, Lt. Bob Kroll, told The Associated Press on Wednesday that Clark was shot while struggling and trying to “disarm” the arresting officer.

The officers involved in the shooting were identified Wednesday as Mark Ringgenberg and Dustin Schwarze, both with seven years of experience including 13 months with the Minneapolis department. Their race wasn’t released because it’s private under state law.

The shooting took place on Minneapolis’ north side, where the population is predominantly black and generally poorer than the rest of the city. The four neighborhoods nearest the shooting are 53 percent black, according to 2010 census data. The city as a whole is 60 percent white.

Chuck Samuelson, executive director of the American Civil Liberties Union in Minnesota, said tension has risen as police have stepped up their presence in high-crime areas.

“Even in the midst of protests and demonstrations, we will continue to have important dialogue and conversations to keep moving forward,” he said.