Old house, new location [only in America!] - The Horn News 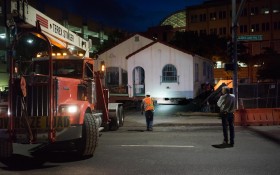 Years after a big city sprouted up around a tiny California house and its 87-year-old owner refused to sell the only home he’d ever known, heavy equipment rolled up to the lot.

But it wasn’t there to demolish the three-bedroom Oakland house built by Lawrence Bossola’s parents. It was there to move it down the street.

The San Francisco Chronicle reports that a hospital next door bought the land after Bossola died in 2001. Officials were surprised when several people competed to buy and relocate the house.

The anxious new homeowners watched early Sunday as workers picked up the house and then set it down on its new lot. Curious onlookers snapped pictures as it traveled down the street.

Owners Kathleen and David Stone say it cost about $75,000 to move the house and demolish the basement.