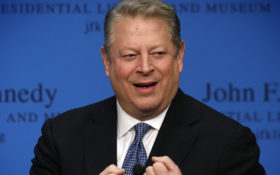 Al Gore is back, and he’s more bitter than ever!

The former vice president and failed presidential candidate has taken a departure from his constant doom-and-gloom predictions about the looming end of the world.

And his memories of the people he’s most closely linked to aren’t very fond at all!

Gore is reportedly bitter at former Secretary of State Hillary Clinton, who he believed was a rival source of power in the White House of President Bill Clinton.

And he’s also blaming the former president for his stunning 2000 election loss.

Gore reportedly believes that the Monica Lewinsky scandal – once again making headlines more than 20 years later – tanked his own presidential ambitions, according to a new book, “First In Line: Presidents, Vice Presidents and the Pursuit of Power,” by Kate Andersen Brower.

The book said Gore faithfully played second banana to Clinton “only to have his presidential ambitions quashed by the president’s affair.”

He’s even angry about how Clinton broke the news to him, in a limo about a week before he confessed to the American people.

“Well, this is the first time you have apologized to me personally,” Gore complained, according to a Daily Mail excerpt.

“After his confession, Clinton was in good spirits but Gore emerged from the car upset, offended, and conflicted about what it all would mean for his own presidential ambitions,” the book said.

What it meant was everything: Instead of running on the dot-com economic expansion and relative peace and prosperity of the Clinton years, he found himself running away from a tone-deaf, scandal-plagued president crippled by an impeachment over an ugly sex scandal.

Gore, of course, lost the infamous 2000 recount election to George W. Bush, but it would be unfair to blame Clinton entirely.

Gore was never a candidate with electricity. He was considered so dull that a running gag was that his Secret Service code name was “Al Gore.”

He had a campaign to match: It was so lackluster that he was unable to win even his home state of Tennessee, which sent him to the Senate twice and voted for Bill Clinton twice.

If Gore had managed just that… winning his home state… Florida wouldn’t have even mattered.

Instead of carrying Tennessee, he’s carrying a two-decade grudge against the Clintons.

That’s a far different take than what Gore himself once said.

“For almost all those eight years the relationship was one between brothers,” Gore once wrote, according to the Daily Mail. “That may be a cliché and I run the risk of overstatement, but really we became extremely close.”

But the new book said Gore was more like a brother not to Bill Clinton, but to Hillary – and they had an ugly sibling rivalry.

“The two fought over turf almost like a brother and sister fighting over their father’s attention,” the book said, according to the Daily Mail excerpt.

Even today, Gore is still so bitter that he can’t spout routine pleasantries about Hillary.

When asked to comment for the book, he declined.

“I expected him to say Hillary Clinton and I had a great working relationship,” she told the newspaper.

Instead, he joked that if he did an interview it would have to be cut short.

Don’t shed any tears for Gore; private life has been very, very good to him.