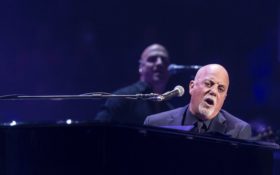 Legendary singer Billy Joel is used to being the big shot…

But now he wants his ex-girlfriend to make the rules.

The New York Post is reporting that Joel’s ex-girlfriend, Trish Bergin Weichbrodt, is running for Congress.

And Joel is expected to endorse her run.

“Yes, I’ve submitted my papers to begin ‘Trish Bergin for Congress,’” she told The Post.

“I’m excited to be considered to represent the residents of Long Island in Washington and on the forefront of the issues that affect us globally.”

She’s looking to fill the seat of the retiring GOP giant Rep. Peter King, R-N.Y. — and she’s not wasting any time doing so, meeting Thursday with the Federal Elections Committee to make it official.

The move will pit her against a bevy of other GOP hopefuls eager to fill the warm seat suddenly up for grabs in the Long Island district of New York.

There’s indication Joel will try and tip the scales in the favor of his former lover.

Joel, according to The Post, is still very much a fan of Bergin’s political acumen. He said of her back in 2009: “She’s always had the best interests of Long Island in mind, and she was always very well-informed about our important local issues.”

It seems as though there’s no ill-will between the two, even after Bergin rejecting Joel’s marriage proposal more than nearly two decades ago.

She broke his heart, but he didn’t let it affect his politics.

“I would vote for Trish Bergin in a heartbeat,” he said.

Her run for Congress isn’t her first brush with politics. She’s a local giant in New York’s Republican scene, and already serves as a councilwoman for Islip, N.Y.

The Post reports that she was considered to be the GOP nominee to run for New York’s Lieutenant Governor position.

The early buzz around the Empire State indicates that many expect Bergin to be a front-runner in the race.

One local Republican leader said of Bergin, quoting the famous Joel song: “She’s just got a way about her.”