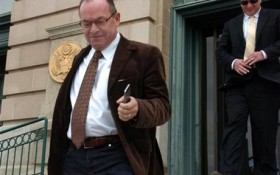 A one-time billionaire blamed for driving a posh Montana resort into bankruptcy will stay in jail while a judge tries to force him to reveal what happened to some of his fortune, a federal appeals court ruled.

Haddon ordered Blixseth incarcerated in April until he reveals exactly what happened to $13.8 million from the 2011 sale of a luxury property in Mexico, which defied a prior court order.

The Yellowstone Club near Big Sky went bankrupt after Blixseth, a resident of Washington state, pocketed much of a $375 million Credit Suisse loan to the resort and later gave up control of the enterprise to his ex-wife during their 2008 divorce.

In recent months, he has contended that much of his money was squandered, largely on attorney fees during a seven-year legal battle against the club’s remaining creditors.

Those creditors have civil judgments against Blixseth for more than $250 million. They say he sought to conceal his money through complex real estate deals and transfers of wealth to relatives, all while maintaining a lavish lifestyle.

So far, the creditors have collected only about $140, said Kevin Barrett with the Bailey & Glasser law firm, which represents the creditors’ entity, the Yellowstone Club Liquidating Trust.

How much money Blixseth has left “is the multimillion-dollar question,” Barrett said.

He said the appeals court ruling leaves it up to Haddon on how to proceed, and it’s possible that Blixseth will have to testify for the first time since his incarceration.

However, Blixseth’s attorney said the ruling on his client’s petition opens the door to a more formal appeal. Attorney Philip Stillman has argued that keeping Blixseth in jail for so long turns the contempt finding into a criminal matter, which entitles him to a bail hearing.

“I would have preferred a ruling that said Haddon screwed up and reversed the (incarceration) order in its entirety,” Stillman said, adding, “I think Tim’s going to be out on bail fairly quickly.”