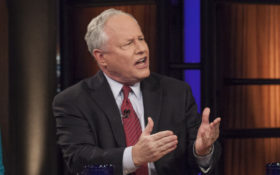 In any good play, actors do everything they can to convince the audience they mean every word they say — even though someone else wrote the script.

It tuns out, politics is no different.

NeverTrump leader Bill Kristol and other leading anti-Trump political figures are acting as puppets for liberals and Democratic talking points.

And they’re being paid to do it.

The revelations were made by Julie Kelly in her new book, “Disloyal Opposition: How the #NeverTrump Right Tried – and Failed – to Take Down the President.”

“Kristol and most of his NeverTrump cohorts are on the dole of a left-wing philanthropist generously underwriting any cause or influencer committed to ending the Trump presidency.”

Omidyar’s Iranian parents raised him in Paris, but becoming a U.S. citizen made him wealthy beyond his wildest imaginations.

He founded eBay, and his net worth of $12 billion ranks him as the 36th richest man in America, according to Forbes magazine.

Omidyar isn’t flashy; he’s practically anonymous. But in all the right circles, he’s being touted as a possible replacement for the aging left-wing sugardaddy George Soros.

His network of “philanthropies,” the Omidyar Network, gave $85 million to his pet causes in 2017.

Omidyar makes no bones about his politics: He’s an extreme leftist. In 2009, Omidyar donated $30 million to the Clinton Global Initiative. And one of the publications he funds is backing the Bernie Sanders-AOC socialist wing, according to Politico.

But why stop at one party when you can control two? Now he’s financing the NeverTrumpers’ battle to wrench Trump out of office and purge the Republican Party of real conservatives.

In summer 2018, Omidyar’s “Democracy Fund” announced it would spend $100 million to defeat Donald Trump and he turned to NeverTrumpers to lead the way.

They have been for years, Kelly writes.

“Kristol, in fact, is the biggest recipient of Omidyar’s political grudge money,” Kelly writes in her breathtaking exposé.

A foundation run by Omidyar has donated $4 million to just one of Kristol’s nonprofits, called Defending Democracy Together, which runs a group called Republican Voters Against Trump.

“This billionaire” is “buying off so-called conservatives to create the illusion of broad intra-party disgust with Donald Trump,”writes Kelly, “an illusion that does not exist but that NeverTrump is paid — handsomely — to represent.”

Kristol even teased a run against President Trump the 2020 Republican primaries, attending events in New Hampshire and Iowa. In the end, they settled on former Massachusetts Gov. Bill Weld, a liberal friend of Hillary Clinton who accused Trump of “treason” before his campaign hit the wall.

So, Omidyar’s minions are trying to beat Trump by cozying up to the Democratic Party. Kristol took $1.2 million of Omidyar’s money to start a new group called the “Alliance for Securing Democracy,” and his partner is none other than Hillary Clinton’s former campaign manager, John Podesta.

In February, Kristol finally came out of the closet, tweeting, “We are all Democrats now” and, then a month later he started drumming up support for Joe Biden in the primaries.

"Whatever the case for either Amy Klobuchar and Elizabeth Warren…neither is going to be the nominee. And…it’s not going to be Mike Bloomberg either. So it’s Bernie Sanders or Joe Biden." Tomorrow, if you live in one of 14 states, you can choose Biden.https://t.co/btuPbGtWxG

“Nearly every outspoken Trump foe on the right is somehow connected to Omidyar’s largesse through the Democracy Fund and its ‘sister organization’ Democracy Fund Voice,” writes Kelly.

But even with all this said, there’s a big problem for Omidyar: It isn’t working. Donald Trump has a 91 percent approval rating among real Republicans.

Even liberal comedian Stephen Colbert called Wilson and his cronies “savvy grifters who ruined the country before.”

Thanks to Kelly, we know who’s behind the curtain, pulling the strings and putting the words into their mouths.