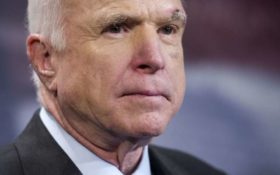 According to former cable news host Bill O’Reilly, McCain stopped the Senate’s “skinny repeal” of the Affordable Care Act as an act of spite towards President Donald Trump.

“I think McCain despises Trump so much because of the POW comment during the campaign,” O’Reilly said in an appearance on the Glenn Beck Radio Program. O’Reilly said. “I think it’s about McCain basically saying to himself, ‘I really despise Trump and I think Trump should be out of there. I’m going to make it impossible for Trump to have any kind of legislative victories.’ That’s what I think this is about.”

Glenn Beck responded to O’Reilly’s accusations by agreeing — but said the hate from McCain runs deeper than just Trump.

According to Beck, McCain dislikes all hardline conservatives.

How much deep does McCain’s hate for conservatives run?

According to insiders, he was joking with Senate Democrats after the vote and told them “Let’s see Donald make American great again now!”

Trump angered McCain when he made a statement on his war record at a campaign rally in Iowa on July 18, 2015.

“He was a war hero because he was captured. I like people who weren’t captured,” Trump quipped.

From the beginning, I have believed that Obamacare should be repealed and replaced with a solution that increases competition, lowers costs, and improves care for the American people. The so-called ‘skinny repeal’ amendment the Senate voted on today would not accomplish those goals. While the amendment would have repealed some of Obamacare’s most burdensome regulations, it offered no replacement to actually reform our health care system and deliver affordable, quality health care to our citizens. The Speaker’s statement that the House would be ‘willing’ to go to conference does not ease my concern that this shell of a bill could be taken up and passed at any time.

I’ve stated time and time again that one of the major failures of Obamacare was that it was rammed through Congress by Democrats on a strict-party line basis without a single Republican vote. We should not make the mistakes of the past that has led to Obamacare’s collapse, including in my home state of Arizona where premiums are skyrocketing and health care providers are fleeing the marketplace. We must now return to the correct way of legislating and send the bill back to committee, hold hearings, receive input from both sides of aisle, heed the recommendations of nation’s governors, and produce a bill that finally delivers affordable health care for the American people. We must do the hard work our citizens expect of us and deserve.

Vote here and let us know who YOU agree with!