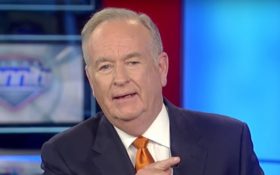 Over the weekend, up-and-coming conservative star Candace Owens was attacked by liberal Hollywood actor Tom Arnold for praising President Donald Trump as “not just the leader of the free world, but the savior of it as well.”

But it was rap superstar Kanye West that made headlines when he tweeted his appreciation for Owens’ conservative thinking — sparking a firestorm from the leftists that were insulted that the pop culture icon isn’t a liberal.

Former Fox News host Bill O’Reilly — a one-time critic of West — even tweeted that he was disturbed by the vicious attacks West received for applauding Owen’s conservative ideas.

A brawl broke out on Twitter Saturday after Arnold took grievance with Owens’ support for the president.

When @PerezHilton @TomArnold and @ShaunKing, 3 white men, rush to viciously attack the freedom of two black people who refuse to be pawns to a leftist ideology—it should ring as a wake up call to the world about who the real racists are.

None of you white men own my blackness.

Her message then provoked Arnold’s vulgar response. He has since the deleted the tweet, but users took a screenshot prior —

West praised Owens on Twitter for her strong thoughts —

Aside from being an insane alt right race pimp Candace Owens thinks Donald Trump is literally the messiah not you @kanyewest so you might want to reconsider https://t.co/dKVnbi3Ila

Candace Owens has proven to be anti-Black, anti-LGBTQ and fact-hating.
(Honestly, there are so many more descriptors.)

For Kanye to align himself with her is messy and dangerous.

Bruh. This is so disturbing. This says more about you than her.

For those that don’t know Candace Owens thinks Donald Trump is a savior. https://t.co/QH1L1gj4Wi

But West did find a friendly tweet from an unlikely source.

O’Reilly responded to the hate West has received by stating, “Kanye West finds himself under attack by the American Stalinists. Please read my column posted right now on http://BOR.com about the attack crew. Frightening. I’ll deal with Mr. West tomorrow.”

Kanye West finds himself under attack by the American Stalinists. Please read my column posted right now on https://t.co/fqUvO5EEW0 about the attack crew. Frightening. I’ll deal with Mr. West tomorrow.

The one-time critic of West’s ideological thoughts was even frightened by the hatred he was taking from his so-called “fans.”

As Owens pointed out to Arnold, liberals need to wake up and recognize they only promote minority opinions if it fits within their narrow agenda.

Being a liberal is like being a pawn to an ideological narrative — and being a conservative means being free. It is no wonder that even West has seen the conservative light.