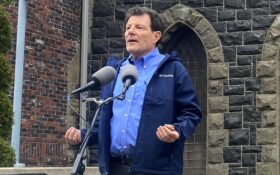 Microsoft founder and billionaire “philanthropist” Bill Gates has decided on the next Democrat he wants to promote to higher office—and he’s put his money where his mouth is.

Gates has made a hefty campaign contribution to a man who wants to run for governor in Oregon, near the Microsoft’s home in Washington state. He thinks this man is a deep thinker who will solve the state’s problems with his “progressive” philosophy.

There’s just one problem: The man doesn’t legally qualify as a citizen of Oregon.

Gates has decided the perfect governor of Oregon is Nicholas Kristof, a former columnist with The New York Times and a winner of the Pulitzer Prize.

Kristof grew up in the town of Yamhill, Oregon—a village of just over 1,100 people. His family still owns a farm a few miles outside town. Kristof says he lives there… but the mayor says she’s never seen him, ever.

Kristof was happy living the New York lifestyle, but then all of a sudden, he got interested in his hometown again.

He wrote a whole book called Tightrope about bout how Oregon’s politicians—mostly Democrats—failed the state when it comes to homelessness, drugs, and the economy. He wrote an honest book about how Democrats screwed up his state and turned it into a hellhole—but then decided what Oregon needs is more liberalism. Kristof is as liberal as anybody with the job title “Times columnist.”

Kristof swooped into Oregon, said he was their savior, and piled up campaign cash from Bill Gates and his buddies. Bill and Melinda Gates, gave him $50,000.

All told, he raised a cool $2.6 million—but his campaign money is from out of state, too.

At least 75 percent of his campaign chest comes from outside Oregon—most of it from the richest and most elite forces in the world. The head of LinkedIn gave him $100,000. The co-founder of WeWork—the real estate company known for shared workspaces that faced major problems thanks to the coronavirus—forked over another $50,000.

It’s almost like Gates and his big-money tech pals picked him.

But their plan ran into one serious problem: Under state law, you have to live in Oregon for at least three years before you can run for governor… and Kristof hasn’t.

At the earliest, he’s been a legal resident of Oregon since December 2020, barely over a year… and there’s lots of evidence that, before moving, he thought of himself only as a New Yorker.

He cast an absentee ballot from his Oregon home—in New York’s general election in 2020.

If you vote in another state, you either don’t live in Oregon or you committed voter fraud.

Another way to look at it is that he lived in Oregon but chose to vote in New York—which isn’t exactly going to help him sell the idea that he’s a faithful Oregon native.

Not only that, but Kristof’s driver’s license was from New York. Kristof always paid the property taxes on his family’s 73-acre Oregon farm… from his address in the ultra-rich suburb of Scarsdale, New York.

He could release his tax returns to show which state he paid income tax in—and listed as his permanent address—but he’s refused every request to turn them over.

So, Oregon election officials have rejected his attempt to get on the ballot, as of this month. In response, Kristof has decided to sue all the way up to the Oregon State Supreme Court.

The wealthy New Yorker is so set on forcing himself into Oregon politics that his legal team has come up with creative ways to “prove” he’s really an Oregonian. “Kristof’s lawyers point to other Oregon bona fides: He’s hiked the Pacific Crest Trail, he’s eaten at Mo’s, a legendary Oregon seafood restaurant, and Crystal the family dog competed in Oregon dog shows,” according to Politico.

Well, I guess that settles that.

But Oregon voters know the difference. Even all his outside money from the world’s most glamorous millionaires and billionaires doesn’t put him in first place: The best-funded candidate in the race right now is former Oregon State Senator Betsy Johnson, who’s described as a “conservative Democrat” who voted with Republicans a lot: She has $3 million in her war chest, mostly from the voters of Oregon.

Honestly, you have to sympathize with Kristof, just a little. Portland is so liberal that other liberals make fun of it. Even Hollyweird has turned the city’s love of political correctness into a comedy show.

Portland Democrats don’t believe in borders. They don’t believe in sex. They think that anyone has a right to come to America from anywhere in the world and have the same rights as native-born, without passing a citizenship test: Illegals get everything the country has to offer from day one. And they believe that if someone “identifies” as a member of a different biological sex, society has to “affirm” that choice and crush anyone who says otherwise.

Why can’t a carpetbagger move from New York, identify as living in Oregon, and become governor?

Maybe Kristof will make Oregon rethink its commitment to reality on a few of these issues—which would be the first time a Times columnist has done anything really thought-provoking in years.