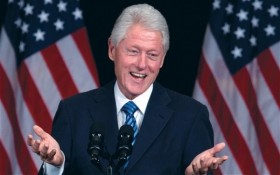 Could a Hillary Clinton presidency essentially turn into a third term for former President Bill Clinton?

Hillary Clinton is claiming that Bill Clinton will take the lead on the economy if she wins the White House, an unprecedented role for a presidential spouse.

What his work would be remains unclear: not a cabinet post, she indicated. But in some way, he’d be “in charge of revitalizing the economy.”

While Clinton supporters cheered, critics were quick to pounce on the suggestion. The Associated Press responded that “The notion of a 2-for-1 Clinton presidency is back.”

“This is a terrible idea and, possibly, the most tone-deaf suggestion Clinton has made during the current campaign,” TIME responded.

Now, facing a two-front fight against Vermont Sen. Bernie Sanders and GOP nominee Donald Trump, she’s stressing that Bill Clinton would be a critical part of her administration.

“Tell me anybody else who’s been here as much or knows us as well,” said Democratic Sen. Joe Manchin, of Bill Clinton, during a campaign event in West Virginia. Hillary Clinton lost that primary — a state her husband won by double digits — earlier this month to Sanders.

The GOP front-runner and his team are making a different political bet. They see Bill Clinton’s history of scandal as ripe for exploitation.

Still, in recent weeks, Clinton has begun sketching out a bit more of a role for her husband. She told West Virginians, “You’ll get sick of seeing him,” earlier this month. “This gets him really, really excited.”

More than any other political couple in recent American history, the Clintons have long viewed themselves as a joint package. While seeking presidency, “Bill Clinton had campaigned promising ‘two for the price of one,’” CBS News said in 2006.

Shortly after entering the White House, Clinton appointed his wife to head the administration’s effort to pass a major health care bill. The failed measure became known as “Hillarycare.”

Campaigning in a smoky diner in Paducah, Kentucky, on Monday, Clinton was surrounded by people who more affectionately recalled the Clintons. Bill Clinton campaigned in the town right before the 1992 election that made him president.

Joanne Clark, 54, exclaimed that she had shaken hands with Bill Clinton all those years ago. “He’s gotta get out of retirement!” replied Hillary Clinton.