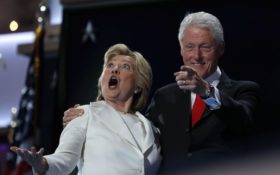 Sometimes great minds have to wait for history to catch up them before others understand ideas that are later considered common sense.

Galileo had to wait for the masses to believe the sun is the center of the universe. Louis Pasteur had to wait decades for people to realize that pasteurizing milk could save lives.

The Horn readers had to wait 20 years, but the day is finally here: A new poll shows that a majority of Americans believe that former President Bill Clinton is a “sexual predator.”

Most of us have believed this for years – but now the rest of the country believes that Clinton groped, flashed, fondled or raped women, maybe even while he was president of the United States.

Rasmussen polled 1,000 likely voters and found that “53% describe the ex-president as a sexual predator.”

“Interestingly, men (55%) are more likely to consider Clinton a predator than women (50%) are,” the polling company reported on Monday.

The survey came after a disastrous week of Clinton gaffes while responding to questions about the #MeToo movement – and allegations about his own sexual history.

Bill  told NBC’s “Today” Show on June 4 that he did not owe Monica Lewinsky a personal apology for any potential sexual harassment, and that he “dealt with it 20 years ago-plus.”

That Thursday, he told “PBS NewsHour” hostess Judy Woodruff that he and other men couldn’t be held to today’s standards – like getting a woman’s consent.

“I think the norms have changed in terms of what you can do to somebody against their will,” he said.

A Clinton spokesman, Angel Urena, tried to save his boss by saying “it’s clear from the context” that Bill was “not suggesting that there was ever a time that it was acceptable to do something against someone’s will” – but it wasn’t clear people on either side of the aisle.

CNN, which was once known as the Clinton News Network, couldn’t defend him.

“It feels like…he just doesn’t get it,” he said.

Bill Clinton's statement revealing and VERY troubling. Most of us believed that rape and sexual assault were ALWAYS wrong and illegal. Those were NORMS for the rest of us already. https://t.co/l8XSR4UcvU

But nobody knew Bill’s dark and reportedly criminal ways like the women in his past, who pulled no punches responding to his self-serving interviews.

“He’s a serial predator. He’s a thug,” said Kathleen Willey, who says announced she had been sexually assaulted by Clinton in 1993.

“He’s hurt and destroyed a lot of women,” she told the New York Daily News. “He owes all of us an apology.”

Juanita Broaddrick, who revealed that Bill raped her in 1978, agreed. “This man cannot say he supports MeToo,” she said. “He probably is the reason there is a MeToo movement.”

They were also sickened by Bill’s claim that he “paid a price” for his affairs in the Oval Office.

“It’s disgusting that he could play the victim card,” Broaddrick added, saying she was “absolutely disgusted” by him.

No matter how credible their allegations, or the tawdry details they related about Bill, some people have always shut their eyes to the obvious.

A feminist confessed on national television that she didn’t care whose lip Bill bit – as long as he followed their left-wing agenda.

And Rasmussen found that plenty of people are still in denial: 24% of people believe Bill’s story that he’s the real victim.

CNN’s Van Jones is one person not afraid to show public sympathy for the former predator-in-chief, even today. Jones, who was a street radical before former President Barack Obama brought him into the White House, said, “You can tell his heart is in the right place.”

Jones said, “I hate to see the guy get beat [sic.] up” just because his “word choice is just not proper.”

But Bill, whose worth an estimated $80 million minimum, doesn’t know the first thing about getting beaten up. He’s been allowed to wriggle out of every allegation, including multiple sexual assaults.

Broaddrick and Willey know about getting beaten up because their “word choice” was “not proper” – because the word they chose was “no.”