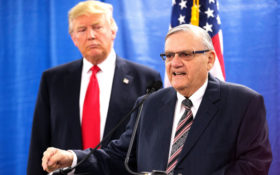 The 85-year-old Arpaio is a Republican and close ally of President Donald Trump.

Arpaio tweeted Tuesday he seeking the post to support Trump’s agenda “in his mission to Make America Great Again.”

Arpaio was spared a possible jail sentence last year when Trump pardoned his conviction for disobeying a judge’s order in an immigration case.

He flirted with the idea running for Arizona governor five times but decided against doing so each time.

Arpaio says in a fundraising email that he filed paperwork Tuesday for the Senate run.

The Republican Flake has been critical of Trump and announced last year that he would not seek another term.