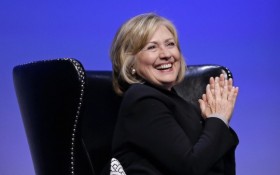 A recent gathering of some of the most rich and influential leaders in the Democratic party occurred yesterday — and they took extraordinary steps to keep the public from knowing what they discussed.

Super delegates, big money donors and establishment insiders paid up to $27,000 to attend the fundraiser, eager to hear a speech by former Secretary of State Hillary Clinton.

Reporters were banned from attending the event, reports on Clinton’s speech were prohibited, and organizers even went so far as to set up ‘white noise’ machines to guarantee the content of Clinton’s speech was kept under wraps.

Guess @HillaryClinton campaign dsn’t want reporters to hear fundraiser speech. Turned on a static noise machine pointed at us when she spoke

The fancy political fundraiser occurred at the Park Hill, Colorado home of Gov. John Hickenlooper — a super delegate who has already pledged his loyalty to the Clinton campaign, despite her loss by over 20 points in the state primary to Vermont Sen. Bernie Sanders last month.

Bush shared video of the event with the noise machines off —

Here’s what it sounds like with that static noise machine turned off at the @HillaryClinton campaign fundraiser pic.twitter.com/keyuXwQad2

.@cascamike listen here for sound of what was turned on after the bands and just before the speeches. pic.twitter.com/GhSE15NDeN

The noise device was placed on the property inside of a fence and aimed in the direction of the press, Bush said.

The fact that Clinton would try to hide the content of a speech to big-money donors isn’t terribly surprising. She has come under relentless attack from Sanders over the past several months for her ties to wealthy special interests.