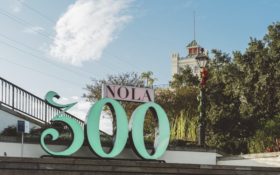 The Big Easy is celebrating a big birthday this year: 300 years since New Orleans was founded.

The celebration began New Year’s Eve with a massive fireworks show over the Mississippi River. Exhibitions, festivals and events planned throughout 2018 — including Mardi Gras — will reflect the tricentennial theme.

The city’s three centuries of history include “colonization by both France and Spain, a British invasion, devastating fires, pirates, yellow fever and hurricanes, among other challenges,” said Kristian Sonnier, spokesman for the New Orleans Convention and Visitors Bureau. Through it all, New Orleans managed to hold on to what Sonnier calls “authentic traditions and a sense of place” — attributes that have made the city one of the most interesting destinations in the U.S.

New Orleans was founded by the French Mississippi Company in the spring of 1718 by Jean-Baptiste Le Moyne de Bienville, then taken over by the Spanish in 1763. The U.S. acquired it as part of the Louisiana Purchase in 1803.

Catholic faith and traditions have played a role in New Orleans’ culture since Feb. 9, 1718, when a priest planted a cross on the site where the St. Louis Cathedral now stands. An exhibition called “The Church in the Crescent: 300 Years of Catholicism in New Orleans,” on display at the Old Ursuline Convent Museum explores the city’s Catholic history.

Artifacts related to the city’s early decades and earliest inhabitants, including Native Americans, European settlers and enslaved Africans, will be displayed at The Historic New Orleans Collection for a show called “New Orleans, the Founding Era,” opening Feb. 27.

The New Orleans Museum of Art’s “Changing Course: Reflections on New Orleans Histories ” marks the tricentennial with seven contemporary art projects that the museum says “focus on forgotten or marginalized histories of the city,” opening June 21. Then, beginning Oct. 26, the museum will showcase works by Raphael, Titian, Rembrandt and others from the Duke of Orleans’ collection in a show that runs through early 2019.

Another significant chapter in New Orleans’ history was the Battle of New Orleans during the War of 1812. Andrew Jackson commanded the U.S. troops and his victory over Great Britain made him a national hero. He was later elected U.S. president. Visitors interested in learning more may visit Chalmette Battlefield, located outside New Orleans. It’s part of Jean Lafitte National Historical Park and Preserve.

Annual festivals incorporating the tricentennial theme include the French Quarter Festival, featuring every genre of music from gospel to jazz to cajun and zydeco, April 12-15; New Orleans Jazz Fest, April 27-May 6, and Essence Festival, with a lineup this year that includes Mary J. Blige and Erykah Badu, July 6-8. New Orleans Oyster Festival is June 2-3 and Luna Fete, Dec. 1-31, lights up winter nights with large-scale outdoor light installations using the city’s architecture as a canvas.

An event that’s already under way, Prospect.4, is a citywide art exhibition, through Feb. 25, with 16 displays around town by dozens of artists including Louis Armstrong, Yoko Ono and Kara Walker. Art projects coinciding with Prospect.4 or the tricentennial include a mural by Banksy on display at the Intercontinental Hotel.

Other New Orleans attractions include the National World War II Museum, boat rides on the Mississippi River, the zoo and aquarium at the Audubon Nature Institute, City Park and the Garden District. Regional attractions include bayou tours, the Tabasco sauce factory on Avery Island, and Laura Plantation, which tells the story of Laura Locoul Gore, who wrote an extraordinary memoir about life on her family’s Mississippi Plantation. Tours at Laura include the history of the enslaved Africans and their descendants who lived and worked there.