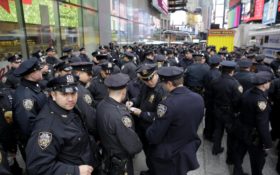 Police are promising a bigger security detail than ever before in Times Square for this year’s New Year’s Eve celebration, which will cap off a year that saw a number of deadly attacks on innocent crowds, including a vehicle rampage at the very spot where revelers will ring in 2018.

In addition to its usual army of snipers, bag-inspecting officers and metal detectors, the department this year is relying on help from a growing corps of “vapor wake” dogs, which are trained to sniff out trace amounts of explosive particles that trail behind someone carrying a bomb.

All 125 parking garages in the vicinity of Times Square will be emptied in advance of the celebration and sealed off, so no one has a chance to sneak in a car bomb, police said.

Detectives already have been assigned to all of the dozens of high-rise hotels in the area, with the aim of preventing the type of attack that happened in Las Vegas in October, when a gunman firing from a casino hotel killed dozens of people at an outdoor concert below. Police wouldn’t discuss whether guests at area hotels would be screened in advance of the celebration, but Police Commissioner James O’Neill said officers already are working with hotel security.

“This is going to be one of the most well-policed, best-protected events at one of the safest venues in the entire world,” O’Neill said.

The extra precautions follow two recent terrorist attacks in the city. A man detonated a bomb in the city’s subway system on Dec. 11, injuring only himself. On Halloween, an Islamic State-inspired attacker drove down a bicycle path, killing eight people before he wrecked his truck and was shot by police.

Times Square itself was targeted in May by a man, said by police to be high on drugs, who drove through crowds of pedestrians for more than three blocks, killing an 18-year-old tourist from Michigan. The speeding vehicle was eventually stopped by one of the squat metal barriers that have been installed around the square’s pedestrian plazas.

Those attacks were reminders that New York City’s massive security apparatus can only do so much, but city officials insisted they will be able to keep people safe on New Year’s Eve.

“The fact is, they will absolutely be safe,” said Mayor Bill de Blasio, a Democrat.

The police department doesn’t reveal the strength of its security force for the event, but it gave some details about the operation at a news conference Thursday.

Officers will have help from roughly 1,000 security cameras installed in and around Times Square.

An area roughly 22 city blocks long and three long blocks wide will be sealed off from both vehicle and pedestrian traffic with cement blocks, sand-filled garbage trucks and other vehicles blocking the streets leading into the area.

Partygoers entering that secure zone will be screened at a dozen access points where they will encounter metal detectors, the vapor wake dogs and officers with portable radiation detectors. Large backpacks are not allowed. All small bags will be searched.

From there, people go through a second round of security screening when they enter spectator pens where they are essentially confined for the night. People who leave the pens aren’t allowed to re-enter — so no bathroom breaks.

Those who make it through will get to see live performances from Andy Grammer, Nick Jonas and Mariah Carey. A cascade of confetti and fireworks will ring in the new year when the Waterford Crystal ball drops.

In addition to the officers at the scene, dozens of analysts will be combing Islamic State propaganda and deciphering data.

Police also will be out in force at Coney Island, where live music and fireworks were expected to draw large crowds, and at a midnight event for runners in Central Park.

“The takeaway from our preparations is this: People will be safe, and they should feel safe, too,” O’Neill said. “Because the NYPD and our partners are well-prepared.”