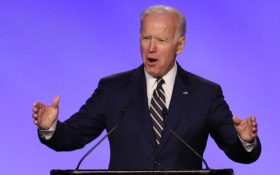 Democratic presidential candidate Joe Biden’s running mate search is days away from being completed — and experts say his vice presidential pick has narrowed to just a few top candidates.

One is Florida’s Val Demings, a former Orlando police chief that’s popular inside the battleground state.

While those credentials could blunt President Donald Trump’s argument that a Biden administration would lead to lawlessness, they could also spur unease among far-left liberal voters who dislike law enforcement, especially at a time of reckoning over systemic racism and policing.

“She’s out here touting a national plan” for criminal justice reform, said Mike Cantone, an Orlando liberal activist who previously supported Demings’ bid for Congress. “But she’s never once called for that kind of reform right here in her backyard.”

In a recent interview, Demings argued she used the tools available to her to address excessive force and bad actors on the police force.

“I think people don’t really fully understand sometimes the restraints that law enforcement executives have as it pertains to discipline,” she said.

After she retired as police chief in 2011, Orlando Mayor Buddy Dyer encouraged Demings to talk to national Democrats about a run for Congress. Demings was initially reluctant, he said.

She lost her bid to incumbent Republican Rep. Daniel Webster, but ran again in 2016 after the district was gerrymandered by state Democrats. That time, she won.

Demings isn’t the only frontrunner, insiders say. According to The Greenwich Time, former National Security Advisor Susan Rice has the advantage because she’s familiar with Biden.

But Rice has her own controversial past — including links to the deadly Benghazi terror attack in 2012.

“Rice, 55, would not be a typical pick. Not only has she never been elected – she has never run for office. Her son has voiced strong public support for President Trump,” The Greenwich Time reported. “And she has faced criticism for her initial comments on the 2012 Benghazi attacks that killed four Americans, for which Republicans made her a leading target of a vitriolic and long-running investigation they are eager to reprise. Once well-positioned to be Obama’s second secretary of state, Rice withdrew from consideration after the uproar over her remarks.”

And, of course, Sen. Kamala Harris, D-Calif., is still considered by many as a favorite of those who surround Biden.

Harris is seen as the moderate, safe choice for Biden that will appeal to independent voters — but whose nomination would likely anger the vocal far-left wing of the Democratic Party.

“Knowing him, Kamala is the best pick for him,” an insider reportedly told The Hill. “Their politics are very similar. I would be surprised if it wasn’t her.”

“I’d be shocked if it was anyone else. You’re getting to the degrees of risk after that.”

What are your thoughts on Biden’s running mate?

Who should Biden pick as VP?