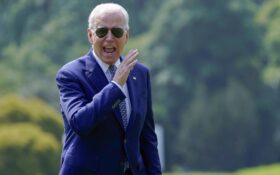 Five cars used by President Joe Biden and his family, operated by the U.S. Secret Service during their Thanksgiving visit to Nantucket, were engulfed in flames on Monday and destroyed according to reports.

The cars were in the parking lot of the Nantucket Memorial Airport. The fire happened just one day after the president and his family left Massachusetts and returned to Washington, D.C.

The vehicles were rented by the U.S. Secret Service from the car rental company Hertz on the island. There were no reported injuries.

Four of the five cars reportedly suffered major damage in the blaze. All five required a tow from the parking lot.

The incident is under investigation because the president and his family had used the vehicles.

“Although it is not immediately clear what caused the fire, the Ford Expedition is under a manufacturer battery recall. The vehicle involved in the fire was scheduled to receive a replacement battery, but it had not yet been swapped out at the time of the fire,” The Daily Mail reported.

Biden and his wife, Jill, were joined on their Massachusetts holiday by daughter Ashley and their troubled son, Hunter, as well as his wife Melissa and Biden’s grandson, Beau.

A large car fire involving multiple rental vehicles at Nantucket Memorial Airport is now out. There were no injuries reported but at least four cars sustained significant damage. #nantucket pic.twitter.com/VF7Zh7qoot

The Biden family was camped out for the Thanksgiving holiday weekend at a sprawling waterfront compound along Nantucket Harbor owned by David Rubenstein, co-founder of the Carlyle Group, a private equity firm. Biden also celebrated Thanksgiving at the home in 2021.

The Bidens have a more than 40-year tradition of spending Thanksgiving on the Massachusetts island.