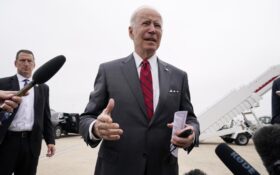 However, some Democrats are calling for Biden to step aside and make room for a new generation. In fact, Biden is facing these calls from inside his own White House.

He hurled some scathing remarks at Biden.

In one poll, 33 percent of Democrats took issue with Biden’s advanced age.

R0se, 36, is talking less about age and more about generational representation.

Biden was born in 1942. Meanwhile, Bill Clinton, Donald Trump and George W. Bush were all born in 1946, the only year to birth more than two U.S. presidents.

“It’s time to move on as a nation,” Rose told a reporter from FOX 5 NY. “We have to turn the page, not just on this politics of ineffectiveness, but also these politics of division and vitriol.”

Former Democrat congressman, current Democrat candidate, and former Biden administration official Max Rose: "I do not think that Joe Biden should run in 2024."

Out of 46 presidents, Lyndon B. Johnson remains the only one to decline re-election, and Biden has repeatedly voiced his intent to run again.

“Look, my intention, as I said, to begin with, is that I would run again. But it’s just an intention. But is it a firm decision that I run again? That remains to be seen,” Biden said on 60 Minutes last month.

“If I were to say to you, I’m running again, all of a sudden a whole range of things come into play that I have requirements to change and move and do… in terms of election laws, and it’s much too early to make that kind of decision.”

The vice president usually wins his or her party’s nomination without much competition, but Harris is watching her approval ratings stagnate despite her boss’s upward trend.

On Wednesday, Harris was pulling a measly 37.7 percent approval in FiveThirtyEight’s poll aggregate. She was sitting in the exact same spot on July 21. By contrast, Biden has seen his approval rating rise by 7.2 points over the same period.

Transportation Secretary Pete Buttigieg, 40, won the Iowa caucus as a presidential candidate in 2020, but in 2024, Buttigieg could face a messy primary against Harris.

Rose — with his record of losing competitive races and antagonizing former bosses — seems unlikely to get very far in a presidential race.