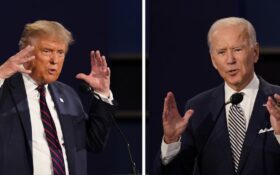 But there was one standard part of the otherwise chaotic night.

Like just about every debate in U.S. political history, the politicians on stage told some whoopers — and we fact-checked some of the biggest half-truths, misinformation, and flat out lies told on stage.

Here are five of Biden’s biggest lies… and one from Trump as well.

This isn’t the first time Biden has misquoted Conway.

He’s claimed in the past she said “the more chaos, violence, the better it is for Trump’s re-election.”

Biden is taking a Conway quote from a Fox News appearance out of context. During that appearance, Conway quoted a restauranter in Madison, Wisconsin that had shouted at rioters who vandalized his restaurant, “Do you want Trump to be elected!?”

Below is the video Conway quoted —

Windows of businesses and residential buildings being smashed on University Avenue — which were not preemptively boarded up. This Papa John’s employee asks protesters, “Do you want Trump to be elected?” pic.twitter.com/IbSubGfGs6

When Biden was talking about Trump’s pick to replace the late Justice Ruth Bader Ginsburg, he warned viewers that she’ll rule ObamaCare is “unconstitutional.”

“She thinks that the Affordable Care Act is not constitutional,” he claimed.

The truth is far different. While Barrett has been critical of the Obama-era law and the court decisions that have upheld it, she has never said it’s not constitutional.

The Supreme Court will hear arguments in the case Nov. 10, and the Trump administration is asking the high court to rule the law unconstitutional. If Barrett is confirmed before election day, she’ll likely be part of that ruling. Only then will anyone know if Barrett considers the law a violation of the constitution.

3. Biden said he does not support the Green New Deal.

Rep. Alexandria Ocasio-Cortez’, D-N.Y., huge Green New Deal bill is unpopular with the average American voter, so it’s no wonder Biden would say he doesn’t support it at the debate. Instead, Biden said he supported “the Biden plan.”

But his website says his climate change plan is built on the “crucial framework” of the Green New Deal.

Biden believes the Green New Deal is a crucial framework for meeting the climate challenges we face. It powerfully captures two basic truths, which are at the core of his plan: (1) the United States urgently needs to embrace greater ambition on an epic scale to meet the scope of this challenge, and (2) our environment and our economy are completely and totally connected.

4. Biden said his son, Hunter Biden, did not accept $3.5 million from Russia

Trump went after Hunter Biden for accepting a $3.5 million wire payment for consulting work from the former Moscow mayor’s wife during the chaotic debate.

The former vice president replied that the accusation was false and had been “debunked.”

Not according to the Senate, however.

The payment was referenced in a detailed report on Hunter Biden’s prior dealings with foreign countries while his father was in office, released last week by Sens. Ron Johnson, R-W.I., and Chuck Grassley, R-I.A.

The report said an investment firm co-founded by Hunter Biden received a “$3.5 million in a wire transfer from Elena Baturina, who allegedly received illegal construction contracts from her husband, the former mayor of Moscow.” The report doesn’t say whether the payment was illegal, but does say it was part of a “consultancy agreement” in 2014.

5. Biden said Trump has not lowered drug prices while in office.

Biden said Trump hasn’t been able to lower drug prices in his first three and a half years in office. But that’s not true. While drug prices haven’t declined as much as the White House has hoped they would, they’ve still declined nearly 1.5 percent in price under Trump’s administration.

What is most remarkable is that this is the first time prescription drug prices have declined in almost 50 years.

“What’s going on? Drugmakers are feeling the heat, for one thing,” MarketWatch wrote in 2019. “Amid a public outcry, lawmakers in both parties from President Trump on down have been pushing drug makers to rein in prices or face potentially stiffer rules. Congress has already held a half-dozen hearings this year and grilled drug industry executives in public.”

Of course, Biden wasn’t the only one telling lies on the stage.

As is typically his style, Trump exaggerated some issues to attack Biden — and made up a few whoopers of his own.

When talking about violence increasing in Democrat-run cities like Chicago and New York City, for example, Trump overstated the facts.

The statistics in Chicago are true, but those numbers are only a small snapshot of crime in the city and the United States, and Trump’s statement highlights how statistics can be used to make almost any point.

In New York, Trump may have been talking about shootings …

They are up in New York by about 93 percent so far this year, but overall crime is fairly stable. Murders are up 38 percent, but there were 327 killings compared with 236, still low compared with New York’s worst years. Compared with a decade ago, crime is down 10 percent in that city, according to The Associated Press.