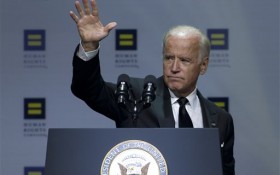 Vice President Joe Biden wants to make the Army into a transgendered fighting force, and he called anyone who disagreed a bigot.

Biden said he unequivocally supports letting transgender people serve openly in the U.S. military, going far further than even the Obama administration has dared talk about before.

Although the White House says Obama supports a Pentagon review aimed at ending the transgender ban, neither Obama nor the military has said definitively that the policy will be changed.

“No longer is there any question transgender people are able to serve in the United States military,” Biden told a crowd of 3,000 at a recent gala.

Biden said gays and lesbians shouldn’t fear social conservatives, downplaying opposition to the move as nothing but “shrill voices” because Americans “have moved so far beyond them.”

In a deeply personal attack, Biden even claimed during his speech that the current crop of GOP candidates is afraid of gay people.

“There’s homophobes still left — most of them are running for president,” Biden said, implicating Republican candidates he could one day face.

There is increasing criticism that the Obama administration is ignoring the advice of military commanders while trying to create a more politically correct fighting force. Even White House spokesman Josh Earnest admitted that the current review of the ban on transgender individuals serving in the military would be conducted “with a bias in favor of changing this policy.”

Biden, it appears, is ready to go a step further and scrap the ban completely.