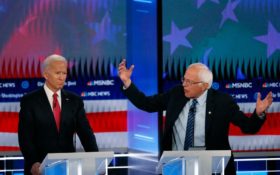 The Democrats consider themselves progressives, but their 2024 presidential candidates may just drag Americans back in time.

Call it the battle of the grandpas!

Sanders’ closest adviser, Faiz Shakir, said the Vermont socialist is considering throwing his hat in the ring, again, in 2024.

The Sanders campaign adviser said he hoped his going public didn’t influence his boss. “I don’t want to make the judgment for him. Obviously, it would be his choice to make,” he said.

But Shakir knows even raising the issue in the media is enough to cause a stir—and serious indigestion at the White House, because Sanders isn’t the only one thinking about the next election.

Not only is Sanders thinking about yet another presidential run, but sources say President Joe Biden has begun making moves behind the scenes to ramp up his 2024 re-election campaign.

“They are also reengaging donors and zeroing in on key staff roles and hires to fortify a unit that could operate outside the close-knit group that runs operations at the White House,” Politico reported. “They’re further along on finalizing a headquarters for the campaign, too, with Wilmington, Del., the likely destination,” although the outlet noted that sleazy, corrupt “Philadelphia has not been ruled out.”

The Bidens talked turkey over their Thanksgiving dinner in Nantucket, and they’re leaning toward a green light.

Since then, Biden has reportedly brought former Obama pollster Jim Messina on board.

The 2022 midterm elections, where Democrats lost fewer seats than normal in the House and gained a seat in the Senate, gave Biden confidence that he could run for a second term.

Biden showed his defiance at a post-election press conference, when NBC News asked him about a poll saying two out of three Americans don’t want him to run for re-election.

“How does that factor into your final decision about whether or not to run for reelection?” asked the reporter.

Insiders say the Biden family will talk about their plans at Christmas, then make a decision in the early months of 2023, around the time of his State of the Union address.

If the two men go head-to-head, it will rank among the oldest candidate fields ever on a ballot.

Massive majorities say that’s too old to be president. A CBS News poll taken in September found 71 percent of Democrats, and 75 percent of Republicans believe there should be a maximum age for president—with the largest share saying presidents should call it quits at age 70. A whopping 84 percent of Americans say 80 is too old.

Sanders is “very aware that he’s older now and he’d have to make a real judgment about his own vigor and his stamina and his desire and hunger and passion to do this a third time,” Shakir admitted.

If Sanders does enter the race, it will be deja vu all over again.

Sanders lost to Hillary Clinton in 2016. Two years ago, he seemed to have the edge. On the eve of the 2020 South Carolina primaries, polls showed Sanders holding a plurality in the crowded field of contenders. Then, Rep. Jim Clyburn endorsed Biden—clearing a path for most of Biden’s rivals to drop out and endorse him.

Biden cruised to the nomination, stayed in his basement through the campaign, and stumbled into the White House.

Biden has moved to reward South Carolina by leapfrogging Iowa and New Hampshire to become the first-in-the-nation primary. And he wants a second victory, which he publicly hopes will be a rematch against President Donald Trump.

As for Sanders, his entry may depend on Biden deciding not to run again. “But if it were an open field?” asked Shakir. “Yeah, I’m confident he would take another look at it.”

Americans are ready for almost anyone to take on Biden and Kamala Harris… but “Crazy Bernie” may be the one candidate they can beat—and the only one Biden can guarantee won’t make his age an issue.