Biden to go on summer vacation... again - The Horn News 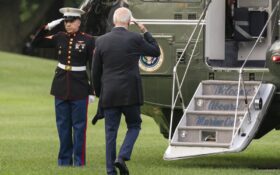 President Joe Biden emerged from COVID-19 isolation Monday to survey the damage from the Kentucky floods. He’s also reportedly planning a few more stops after that… but not as part of his job.

He intends to go on vacation later this week, starting on South Carolina’s Kiawah Island.

Biden has traveled to Delaware 46 times during his presidency as of July 20, CBS News White House Correspondent Mark Knoller reported.

He was planning to vacation in Delaware’s Rehoboth Beach before contracting the virus, the Associated Press reported.

According to the numbers from CBS News, Biden has visited the presidential retreat at Camp David, Maryland, 18 times.

By this count, Biden has spent more than 200 days on vacations, weekends away or outings to Camp David — more than any president since George W. Bush.

Biden tried to take yet another vacation in August 2021, according to the Wall Street Journal, but he was occupied with the withdrawal from Afghanistan.

In this regard, Biden has continued his old habits. He traveled to Delaware often as a senator and as vice president. In fact, he used to commute from Delaware to Washington, D.C., whenever the Senate was in session. The Amtrak only takes a few hours, and the helicopter ride is presumably even shorter.

Amid all these vacations, Biden has given only 17 formal press conferences and 20 sit-down interviews, according to CBS News.

For this reason, he’s been accused of hiding from the press.

“Oftentimes he gives a partial answer and walks away,” newscaster Chris Wallace said on CNN+ in April.

“When you’re standing there you can take a question, you can answer it, you can sluff it off and you move on,” Wallace continued. “It in no way compares to sitting down with a reporter for 20 minutes, 30 minutes and having a — You can’t move away. You can’t duck it.”