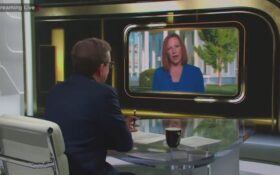 Despite his reputation as a formidable rambler, President Joe Biden has given shockingly few sit-down interviews since he was inaugurated.

Wallace spoke to White House press secretary Jen Psaki this Wednesday, and he pushed her on Biden’s evasiveness. He asked, “Why has President Biden been so sheltered from the press?”

“In what way? He just did a press conference several weeks ago and he takes questions from the press nearly every day,” she said. Most recently, Biden held a press conference in Belgium last month, in order to address our NATO allies about Russia’s ongoing war in Ukraine.

Wallace replied, “I’m going to come back at you on that. In his first year, Joe Biden held two solo news conferences in the White House, and he held five on foreign trips.”

By Wallace’s count, Biden gave 28 sit-down interviews with reporters during his first year as president.

Former President Donald Trump held 95 of them, according to Wallace, and media darling Barack Obama held 162.

“I’ll tell you exactly why that’s different, because when you’re standing there you can take a question, you can answer it, you can sluff it off and you move on,” Wallace said. “It in no way compares to sitting down with a reporter for 20 minutes, 30 minutes and having a — You can’t move away. You can’t duck it.”

What’s more, Biden oftentimes neglects to give full answers. In February, he left a press conference before answering a question about how much student debt to cancel, despite his colleagues’ obsessive focus on this issue.

Wallace pushed on Biden’s habit of giving anemic answers. “Oftentimes he gives a partial answer and walks away,” Wallace said.

We can agree to disagree on that, Chris. I think how he has felt engaging with the press makes sense to him or works is how he used to do it in the Senate, which was to talk to reporters after he did events, take their questions. Oftentimes, he takes multiple questions. Sometimes there are follow-ups. He’s done that two or three times more than most of his predecessors.

Chris Wallace is correct to push Psaki on why Biden isn’t taking more questions from the press. It’s been far less than his predecessors. pic.twitter.com/BJqrn1W4aK