Biden, taking shelter in Massachusetts, sends Obama to do his bidding - The Horn News 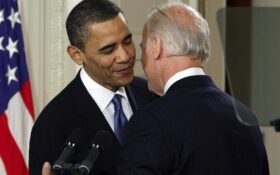 In 2020, Joe Biden faced wide mockery for his presidential campaign, especially his videos released from a basement.

Biden has no plans to visit Georgia. Instead, the president is fundraising from Massachusetts, a safe blue state… and he’s sending his old boss, former President Barack Obama, to do his bidding in Georgia.

“If they didn’t get tired, you can’t get tired,” Obama told a crowd gathered in a cavernous former railroad repair shop east of downtown Atlanta.

Obama told a story about how Walker once claimed he let Obama beat him in basketball, but later admitted he had never met the former president.

“When again and again you serve up bald-faced lies, that says something about the kind of person you are and the kind of leader you would be if elected to the United States Senate,” Obama said.

In a viral video, Obama also lambasted Walker for comparing the Senate race to the horror movie Fright Night.

“Walker has been talking about issues that are of great importance to the people of Georgia like if it’s better to be a vampire or a werewolf,” Obama said. “This is a debate that I must confess I once had myself, when I was seven.”

The answer is obviously the vampire.

Obama: Mr. Walker has been talking about issues that are of great importance to the people of Georgia like if it’s better to be a vampire or a werewolf.. This is a debate that I must confess I once had myself.. when I was 7 pic.twitter.com/TonaibyZ1u

An extended anecdote from Herschel Walker on the trail today about vampires and werewolves:

“Vampires are cool people, are they not?”

“A werewolf can kill a vampire, did you know that? I never knew that. So I don’t want to be a vampire anymore, I want to be a werewolf.” 🧛🏼‍♀️ pic.twitter.com/xpids7oTbW

Even as the senator welcomed former President Barack Obama to Georgia for a second time this campaign cycle on Thursday, Warnock’s campaign this week deferred questions about Biden’s fundraiser in Massachusetts.

Biden was set to join a phone bank run by the International Brotherhood of Electrical Workers helping Warnock’s campaign, before appearing at a fundraiser for the Democratic Senatorial Campaign Committee, which has spent millions of dollars to boost Warnock’s campaign over Republican challenger Herschel Walker.

Aides told the Associated Press that the Boston trip was requested by Warnock’s campaign, and that Biden obliged, reflecting his promise to go wherever Democratic candidates wanted him in 2022.

“The President is willing to help Senator Warnock any way he can, however the senator wants him to get involved,” White House press secretary Karine Jean-Pierre said this week. As often as not, that also meant not going where he was not wanted.

Biden said of another Senate Democrat up for reelection, “I’ll come campaign for him or against him, whichever will help the most.”

Warnock, throughout the campaign, has avoided answering whether he believes Biden should run again in 2024 and whether he’d support the president if he does seek a second term.

In other words, Warnock has distanced himself from Biden. That’s a stark contrast to the runoff campaign after the 2020 election when Biden, as president-elect, came to the state with the Senate balance at stake and told Georgia voters they’d determine the success of his administration and agenda.

Ahead of the Nov. 8 midterms, Biden avoided wading into key Senate races in states like Georgia, Arizona and New Hampshire, where his approval ratings have trailed below his numbers nationally.

A fifty-year veteran of Washington, Biden recognized that statewide candidates especially would seek to stake out a distinct identity for voters frustrated by politics in Washington, his aides told the Associated Press. Biden stuck to nationwide topics, like Medicare and former President Donald Trump.

Thus far, Warnock’s approach has paid off. He was the lone Georgia Democrat who survived to runoff, as Walker trailed all of his fellow Republicans, most notably drawing 200,000 fewer votes than Gov. Brian Kemp, who cruised to reelection.

While Democrats have already locked in control of the Senate for another two years, thanks to Vice President Kamala Harris’ tie-breaking vote, a true majority of 51 seats would speed up the confirmation process for Bidens’ nominees.

Georgia has already opened the polls to early voting, and it will hold the runoff election on Tuesday, Dec. 6.