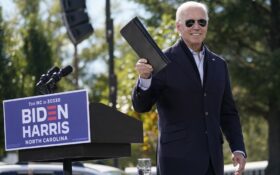 President Donald Trump has been very busy as the 2020 election nears. He has spent countless hours holding campaign rallies, dinners, and election events in recent days — and he’s not slowing down.

Democratic presidential candidate Joe Biden, meanwhile, has suspended his campaigning efforts and returned to his basement in Delaware after an event in North Carolina on Sunday.

While his surrogates will continue to hold events and fundraisers, the Democratic candidate will stay off the campaign trail for the near future.

He won’t return until Friday, his campaign promised. Biden is spending the next four days getting ready for his second debate against Trump on Thursday night.

“When we look at Joe Biden’s schedule, we didn’t see him campaign yesterday. We will see him today. What is his strategy?” CBS News’ Margaret Brennan asked on Sunday. “Because President Trump clearly feels he needs to be out and very visible.”

“At this point, the Biden campaign doesn’t feel that way much at all,” CBS Political Correspondent Ed O’Keefe replied. “He’s in North Carolina today. The Tar Heels state began early voting. This is a state the Biden campaign believes and hopes they can take back.”

The Biden campaign is relying on the same polls the mainstream media uses, which has given them the confidence to take their candidate off the campaign trail while Trump crisscrosses the country.

The only concern Biden’s team has is over voter enthusiasm, insiders say.

“They worry that if they can’t keep their base motivated, keep convincing people to show up, whether it’s early or on the day of, they’re going to be in trouble,” O’Keefe said.

“This week is mostly about debate prep. He will not be seen again after today until Thursday night in Nashville at that next debate. So they’re going to keep him focused on that.”

“That’s a signal that they believe this is still a very big opportunity for them to provide one last contrast with the president and they have to prepare him for potential attacks from the president,” O’Keefe said.

While Biden is staying in his basement and preparing for the next debate, his campaign has asked former President Barack Obama to hit the campaign trail in his place.

But, according to The Associated Press, if Biden ultimately loses this election, he may not be able to say he left it all out on the field.