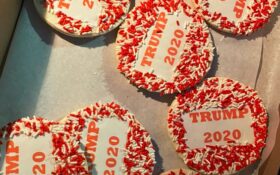 There’s a bakery in Pennslyvania that has some sweet news for President Donald Trump and his supporters.

At least, that’s the lead he has in the Lochel’s Bakery’s viral cookie poll. The bakery, just outside of Philadelphia, has become a popular place for locals to voice their opinion on the presidential race. Lochel’s Bakery let’s shoppers buy either Trump or Biden decorated cookies, and staff keeps track of each one they sell.

Six weeks ago, the bakery launched its informal poll. The results have been unexpected.

“The decorated cookies are always $4.49,” the owner said. “They’re iced, an edible image with the candidate’s name with 2020 put on the cookie, and it’s put into the red or blue jimmies.”

Lochel’s has been doing these informal polls over the last three elections, and they say their cookie poll results usually end up close to the final result. But this year is much different.

The cookies have become so popular, the owners can’t keep up with demand and frequently sell out. They’ve started limiting each customer to six cookies a piece, and will only accept online orders of 100 or more cookies.

“People are going crazy for them,” the owner said.

During a normal election, the bakery sells “a few hundred” presidential cookies. This year, the number of cookies sold has been in the thousands.

“I’ve purchased both kinds of cookies, the red ones and the blue ones. All cookies in there are delicious,” a local told 3CBS Philadlephia. “I’ve seen less Biden cookies so I thought more people were buying Biden.”

The bakery does it’s best to be fair, the owner says.

“We only sell both at the same time. We will not sell just one out there,” Lochel told CBS3. “We don’t think it’s fair to either candidate if there’s just one out there. Plus, we don’t want people to think we’re endorsing one candidate.”

The political cookie poll has become so big it even caught the attention of the Trump campaign.

Eric Trump took a detour on a trip to Philadelphia to cast his cookie ballot on Friday.

I was in Philadelphia today and decided to stop by the incredible Lochel’s bakery in nearby Hatboro. Here is the latest tally: