Poll shocker: Trump wins in a landslide?! - The Horn News 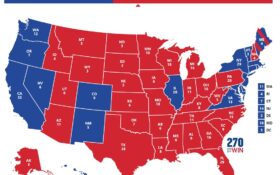 The 2020 election is three weeks from today and, the news media tell us Democratic presidential candidate Joe Biden has an almost insurmountable lead — almost like Hillary Clinton did in 2016.

But two new polls show that Donald Trump is not losing… and he may just be poised to win an Electoral College landslide.

That’s actually down from an even bigger Trump lead among “likely voters” last month.

But the Biden camp’s biggest nightmare may be in the swing states, which put Donald Trump in the White House four years ago.

If the election were held today, the poll predicts Trump would beat Joe Biden in an Electoral College landslide of 320 to 218. That’s 14 points more than he beat Hillary Clinton in 2016.

It has more good news for the president: His real approval rating is 50 percent.

There are still three weeks to go, and it’s no reason for Trump voters to stop campaigning hard—but that’s much different than the defeatism and depression being sold by the liberal media.

Part of the reason for the radical departure is that the Democracy Institute poll found that 77 percent of Trump supporters wouldn’t admit they’re voting for the president, even to their closest friends or family members.

“When you ask people who are they gonna vote for, it changes,” Rush Limbaugh said on his nationally syndicated radio show on Monday. “People, for some reason, do not want to admit to people they don’t know that they’re gonna vote for Trump. There’s fear in doing so.”

Another poll may have captured the extent of the “shy Trump voter” phenomenon.

When pollsters ask Trump voters who they’ll vote for, they often fib. But when the poll asks who they think will win, they choose Trump.

The Gallup poll found that 56 percent of Americans believe that Donald Trump will beat Joe Biden in the 2020 presidential election—and its results have predicted the vote accurately since 1996.

“In each of these polls, Americans accurately predicted the winner of the popular vote,” Gallup said.

Trump weighed in on this poll last Friday during his unprecedented, two-hour national townhall on the Rush Limbaugh Show.

Rush said that when pollsters ask voters who they think will win, “It’s you! You are the one.”

The president replied that his voters “know their neighbors.” They only hide their own voting intentions, “because people don’t want to get involved.” Trump supporters have yard signs stolen, or faced angry taunts and hostility.

The news media use that fear to frame the 2020 campaign as an impending Biden blowout—and the pollsters have only intensified that in the campaign’s final stretch.

The RealClear Politics average of the polls, as well as FiveThirtyEight.com, have Biden leading Trump by at least 10 points nationally. RCP has Biden five points ahead in the swing states.

CNN claims, “Joe Biden’s polling better than any challenger since 1936”—the largest landslide in U.S. history.

Biden’s so confident that he told his supporters in Pennsylvania this weekend, “The only way we lose this is by the [trickery] going on relative to polling places.”

But the Trump campaign says the dirty tricks are from pollsters who sample too many Democrats and urban voters, and not enough Republicans outside major cities.

“This is how some pollsters are skewing the results,” said Corey Lewandowski, Trump’s senior adviser and 2016 campaign manager. “They won’t give us…the partisan makeup of the polls.”

Lewandowski said Biden is in for a rude awakening on election day because of “the increase in the African American vote (Trump’s) going to receive this cycle, compared to where he was just four years ago.”

The Democracy Initiative agrees that Trump has more than doubled his support among black voters since 2016.

Basham called this “Biden’s overarching Achilles’ Heel in this election: comparatively low support and enthusiasm for his candidacy among black voters. To beat Trump, Biden needs nine in 10 black votes, and lots of black voters to cast ballots. Currently, he’s positioned to win only eight in ten.”