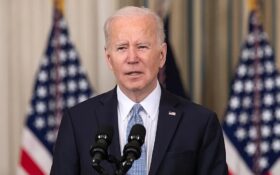 In January 2020, then-President Donald Trump banned some travel from China, due to concerns about the emerging virus.

Three years later, Biden occupies the White House… and he’s also presiding over restrictions on some travel from China.

On Wednesday, the Centers for Disease Control and Prevention announced new COVID-19 testing requirements Wednesday for all travelers from China, joining other nations imposing restrictions because of a surge of infections.

“CDC is announcing today that it will implement a requirement for a negative COVID-19 test or documentation of recovery for air passengers boarding flights to the United States originating from the People’s Republic of China,” the CDC said in a statement, citing concerns about the possible emergence of yet another variant.

“CDC is announcing this step to slow the spread of COVID-19 in the United States during the surge in COVID-19 cases in the PRC given the lack of adequate and transparent epidemiological and viral genomic sequence data being reported from the PRC.”

Some observers have defended Biden. They argued that Biden is only requiring a negative test for travelers from China, rather than banning the same level of travel from the region.

By comparison, Trump signed an order to temporarily bar foreign nationals, other than the immediate family of U.S. citizens and green-card holders, who have traveled in China within the last 14 days.

However, Biden — like Trump — is still singling out China.

One critic on Twitter said, “The hypocrisy is nice to see.”

Other users echoed this sentiment. One said, “This is progressive xenophobia, quite different.” Another person joked, “It’s (D)ifferent this time.”

The Democrats have long campaigned against Republicans while co-opting some of their ideas, as part of a practice called triangulation.

Another Twitter user added, “No one in the mainstream media will ever call him out on this.” Another person slammed Biden for vacationing in the Caribbean during these U.S. restrictions on travel from China.

Other users questioned the effectiveness of this testing requirement in December 2022. One simply said, “This is about 2 years too late.”

Other countries have taken similar steps in an effort to keep infections from spreading beyond China’s borders. Japan will require a negative COVID-19 test upon arrival for travelers from China, and Malaysia announced new tracking and surveillance measures. India, Italy, South Korea and Taiwan are requiring virus tests for visitors from China.

Under the new U.S. rules, travelers to the U.S. from China, Hong Kong and Macau, will be required to take a COVID-19 test no more than two days before travel and provide a negative test before boarding their flight. The testing applies to anyone 2 years and older, including U.S. citizens.

It will apply to people traveling from China via a third country and to people connecting through the U.S. as they go on to other destinations. Anyone testing positive more than 10 days before the flight can provide documentation showing they’ve recovered from COVID-19 instead of a negative test result.

It will be up to the airlines to confirm negative tests and documentation of recovery before passengers board.

“I don’t think it’s going to have a major impact in slowing the spread of COVID-19,” Dowdy told the Associated Press on Thursday. “We have a whole lot of transmission of COVID-19 here within our borders already.”