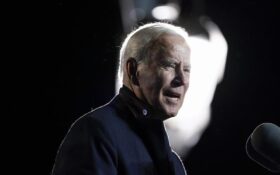 The New Year hasn’t given President Joe Biden any good news yet, at least not when it comes to his approval rating.

Just the opposite: The plunging numbers that dogged him through 2021 have followed him into 2022, and show no signs of a turnaround.

The first CNBC/Change Research poll of the year gives him an approval rating of just 44 percent, with 56 percent disapproving of his presidency so far.

There are two key reasons for it – and they’re the dual disasters of the coronavirus and the economy.

Both were signature issues for Biden on the 2020 campaign trail.

He vowed to bring the raging pandemic under control, something that should’ve been easier with the quick approval of multiple vaccines and several new treatments.

Instead, the nation has seen record cases daily as the delta variant gave way to the omicron variant.

It didn’t help when Biden admitted his administration wasn’t prepared.

“Nobody saw it coming. Nobody in the whole world. Who saw it coming?” he said, despite repeated warnings of new variants from scientists.

The resulting confusion – including the CDC’s constantly changing directives – has led to 55 percent disapproving of how he handled the pandemic, according to the new poll.

Even worse for him, just 26 percent believe the Biden White House has done a good job handing the virus.

Those numbers could sink further as frustrated Americans struggle to get the promised tests needed to diagnose the infection during the latest virus surge.

On the economy, his approval ratings are even worse.

While the stock market has surged, so has inflation – leading to high prices on everyday goods.

And that’s when they can even be found.

Supply-chain issues have led to shortages in key goods and months-long waits for appliances, cars and other major purchases.

The Biden administration had claimed the inflation and supply-chain issues were temporary effects of an economy emerging from a coronavirus-induced hibernation.

A plurality of 38 percent blame Biden for the high prices, and that’s led to a 56 percent disapproval rating on the economy, versus just 44 percent who approve.

Voters weren’t more generous when asked to give Biden a letter grade: Republicans gave him an F… independents assigned him a D… and even Democrats only offered up a C, although they allowed a B on the economy.

Other polls haven’t been much friendlier.

A YouGov poll also out this month put his approval at 40 percent… and overall, his average approval rating on FiveThirtyEight is at just 42.9 percent, part of a plunge that began in July – roughly six months after he took office – and fell below 50 percent on August 16th, sinking even more rapidly as the crisis in Afghanistan unfolded.

He’s been underwater ever since, with next week marking five straight months of approval ratings below 50 percent

That puts him below nearly every president since WWII at this point in the term, with the exception of Donald Trump – and at his current pace, Biden could soon fall below even him by spring.