Biden faces SOTU backlash from both parties - The Horn News 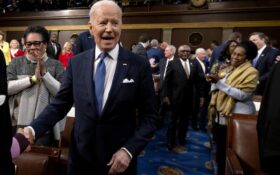 However, the Working Families Party also gave a response, and it tapped Michigan Rep. Rashida Tlaib as speaker — a member of Biden’s own party.

Last week, Tlaib announced her plans for a speech, and then some other Democrats followed suit. Rep. Collin Allred, D-Texas, spoke on behalf of the Congressional Black Caucus, and Rep. Josh Gottheimer, D-N.J., spoke at a panel with other members of the bipartisan Problem Solvers Caucus.

Biden is losing control of his own party.

Tlaib gave the highest profile response of any Democrat. On Twitter, she described it as “a speech about supporting President Biden and his Build Back Better agenda for the people.”

Sure enough, she used her speech to credit Biden for beating the virus into retreat and for presiding over rapid economic growth. Then, she echoed Biden’s calls for Congress to pass the Build Back Better Act, the Freedom to Vote Act, and the John Lewis Voting Rights Advancement Act.

Then, before long, she pivoted to pushing her own pet issues. She urged Biden to cancel student debt, and she urged Americans to elect a “Working Families majority.”

“While we continue building support in Congress, President Biden can use his executive power now to take action, to deliver for the people,” Tlaib said. “He can cancel student loan debt, which would be a lifeline for millions of Americans.”

The Working Families Party has faced criticism for spoiling the Democrats’ electoral prospects. The W.F.P.’s national director once told a reporter, “A smaller but more progressive Democratic Caucus would be a more functional and healthy and coherent caucus.”

Hitting a similar note, Tlaib said without evidence, “The midterm elections are coming up fast, and this year we can elect the Working Families majority we all need.”

Reynolds gave a more typical response for the G.O.P. She painted the picture of a country in the grip of several crises as she hammered the president’s leadership, notably on the world stage.

The governor depicted Biden’s year in office as having “sent us back” to fraught times more than 40 years ago as she made the case for the “alternative” approach of Republicans hoping to capture control of Congress in this year’s midterm elections.

“Instead of moving America forward, it feels like President Biden and his party have sent us back in time to the late ’70s and early ’80s, when runaway inflation was hammering families, a violent-crime wave was crashing on our cities, and the Soviet army was trying to redraw the world map,” Reynolds said.

Republicans have hinted for months at two prongs of the three-sided broadside. But Reynolds’ critique of Biden for the Russian invasion of Ukraine signaled the party’s commitment to casting Biden and Democrats as weak world leaders, compounding their withering criticism of the administration’s handling of the chaotic U.S. withdrawal from Afghanistan last fall.

“Even before taking the oath of office, the President told us that he wanted to ‘make America respected around the world again and to unite us here at home.’ He’s failed on both fronts,” Reynolds said, speaking from the rooftop terrace of Iowa Historical Building with the gold-domed Capitol in Des Moines in the background.

“And now Russia has launched an unprovoked full-scale military invasion of Ukraine, an attack on democracy, freedom, and the rule of law,” she said. “Weakness on the world stage has a cost. And the President’s approach to foreign policy has consistently been too little, too late.”

The swipe goes right at what had been a perceived strength of Biden, who brought to the White House eight years as vice president and decades of service on the Senate Foreign Relations Committee.

However, Reynolds also faced criticism for her own lack of experience in foreign policy. She has gone overseas on economic development missions, but she’s spent the rest of her public service career in Iowa’s state and local governments.